Two New Baby Gorillas born in Bwindi Impenetrable National Park of Uganda at a time when Gorilla tourism was halted due to the Coronavirus pandemic.

The 2 Baby Gorillas were born to two different Gorilla families within the park and these are Nshongi and Muyambi Gorilla Groups. The babies are estimated to have been born on the 25th of April and 1st of May 2020 respectively. To the conservationists and park authorities this was double happiness and a boom to the Gorilla Tourism Industry. 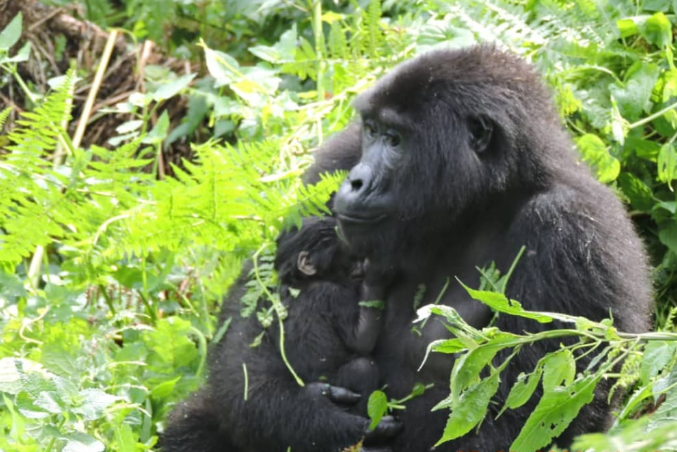 Mother Kabagyenyi of Nshongi group with her new born baby

The two are tightly guarding their baby from any harm.

The Nshongi Gorilla group was the first to be habituated and opened up for Gorilla trekking safaris in the Rushaga sector of Bwindi.

By the time of habituation, the group had at least 35 individuals that later kept on splitting to form other groups.

Now the group has a total of 10 members including the new born baby.

Mother Kabagyenyi who birthed the Nshongi family new baby joined this family from a wild group. By that time she was a sub adult. The family head, silverback Bweza later on started mating with her and now there she has a baby. Mother Kabagyenyi is estimated to be around 10 years of age with this birth being her first. 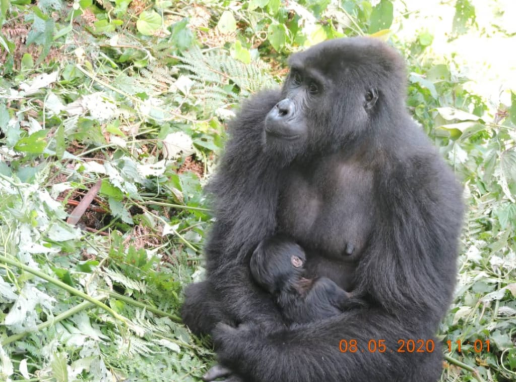 Muyambi family mother with her baby

Muyambi Gorilla family baby was born to silverback Muyambi and an unnamed mother who are soothing and warming their new family member.

The Muyambi Group is the newest formed family in Bwindi forest (Buhoma sector) opened to tourism in 2019.

Mother of the new born joined the group from the wild and is still unnamed.

This family is led by silverback Muyambi who was an adult member of the Mubare family (the first habituated group in the park opened to tourism in 1993) but split away to form his own family that was named after him.

According to the Uganda Wildlife Authority (UWA) officials, the tight security mounted by the two Gorilla Groups has not let them get close to the babies and establish their genders.

They also added that,

“The birth of the new Mountain Gorillas is testimony to Uganda’s successful conservation efforts.

With enhanced integrity of protected areas there has been a general increase in wildlife populations in Uganda.”

With the population in Virunga massif then at 604, this put the Total Mountain Gorilla Population at 1,063. This is the highest ever total of the Mountain Gorillas, which is a good sign of conservation efforts.

Virunga massif covers three countries of Uganda, Rwanda and the Democratic Republic of Congo. The mountain gorillas live in Mgahinga Gorilla National Park, Volcanoes National Park and Virunga National Park respectively in each of the countries.

Since the 604 Gorilla population in Virunga massif is shared, this leaves Bwindi forest as the single habitat with the highest population of Mountain Gorillas.

With the several births that have happened since the last census, the total number of Mountain Gorillas in Bwindi has surely surpassed 460. Uganda still holds 50% of the world’s Mountain Gorilla population.

With many youngsters in Bwindi forest, what a good time to choose Gorilla trekking in Uganda. The global outbreak of the novel coronavirus hit hardest the tourism industry with its far reaching effects distorting Uganda safaris like Gorilla trekking. All Gorilla tourism parks are closed for now but will soon open and tours conducted to see these great apes resume.

Wondering how to plan a Gorilla trekking safari? Worry not, here are all kinds of sample itineraries that have been undertaken and appreciated by many tourists. These Gorilla trekking Packages suit the needs of any kind of traveler and can be tailor made to suit any schedule or desired activities. Check out