Where is Kenya; Location, Map, and Facts | Country Profile

Where is Kenya? Kenya is situated in the eastern region of the continent of Africa. It is a coastal nation whose coastline is shared with the Indian Ocean. 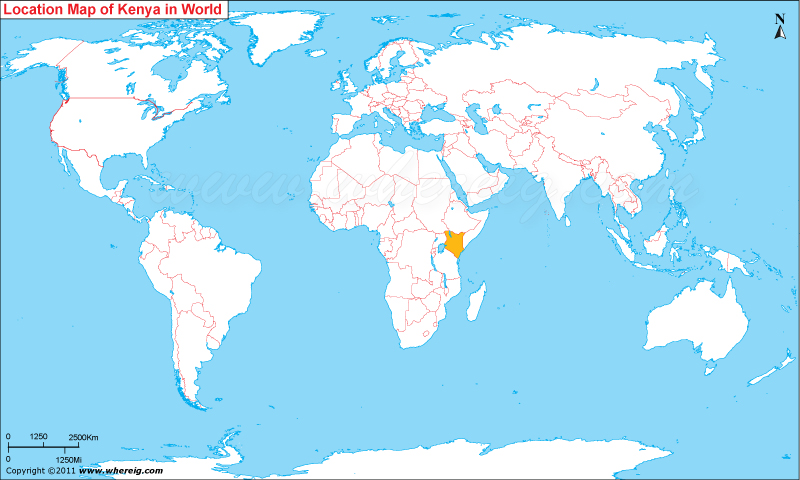 Map showing where is Kenya located in the World.

The southwest of the nation is home to the renowned and stunning Lake Victoria, which draws thousands of tourists each year. Tanzania and Uganda are also part of the vast Lake Victoria’s geographic extension. The President of Kenya serves as both the head of state and the head of government under the presidential representative democratic republic system.

Kenya, the name of the nation, is derived from Mount Kenya, one of the tallest and most significant mountains in the world. The country’s geographical features are quite diversified, ranging from expansive savannah grasslands to semi-arid to dry shrubs. Contrary to the central and western regions, which have woods and mountains, its northern sections have practically desert-like environments. Furthermore, Kenyans can engage in a variety of economic activities thanks to the country’s varied geography and climate.

Additionally, the nation has always been a notable producer of tea and coffee. World-renowned for its tea and coffee. A significant portion of the nation’s economy is dependent on the export of tea and coffee. The recent development of a strong horticultural industry has made the country a big exporter of fresh flowers to Europe. In addition, Kenya is a major and well-known athletics powerhouse that has produced world champions like Paul Tergat and most recently David Rudisha.

The Great Rift Valley divides Kenya’s highlands in half. East of the country, on a rich plateau, are the highlands of Kenya. Since the country has a variety of geographical features, its climate likewise varies by location, ranging from tropical to moderate. Additionally, Kenyan tourism is currently highly well-liked by tourists from throughout the world. Many international tourists favor an adventurous trip to Kenya‘s National Park and Safari. The beaches in Kenya’s safari region are also quite alluring to tourists.