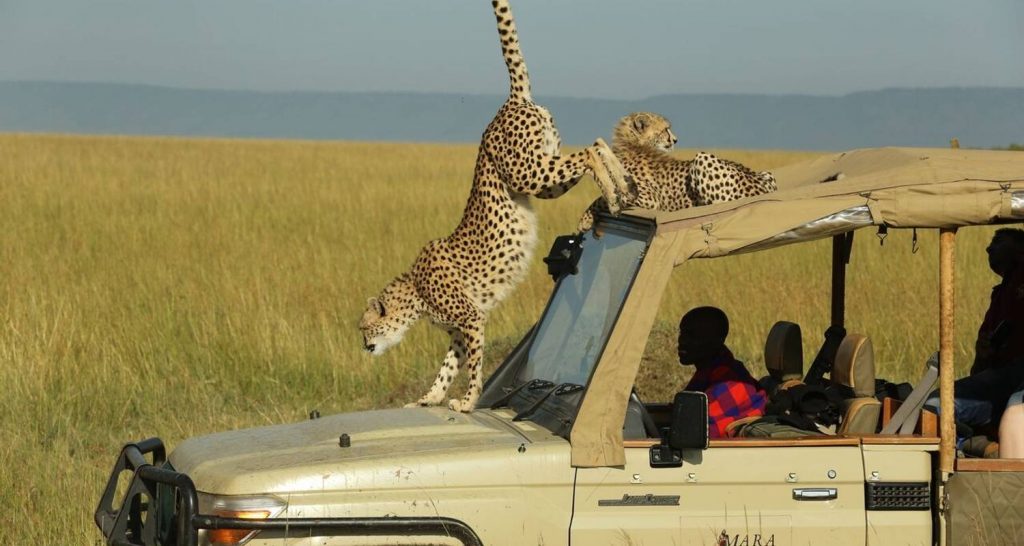 Day 1: Arrival at Jomo Kenyatta International Airport in Nairobi and transfer to hotel.

On arrival at the airport, your Kenya safari guide will in around for pick up and transfer to the hotel. This will be after you have been cleared at the airport. Your driver guide will ensure a drive to a designated hotel where you will rest from jet lag, have dinner and spend the night.

Pick up from your hotel early morning for a drive to Amboseli National Park arriving in good time for lunch. Amboseli National Park provides the classic Hollywood image of Africa. Against a magnificent backdrop of the distant Mountain Kilimanjaro roam vast herds of elephants accompanied by lions, buffalo, cheetah, giraffe, baboon, gazelle hippo, and wildebeest.

When you arrive at the park, the warden will give you several common-sense rules: do not get out of your vehicle, except at designated spots; do not harass the animals in any way; keep to the tracks; no off-road driving; and remember that the animals always have the right of way. You will then have a short game drive in the afternoon.

Despite its small size (392 sq. km), this fragile ecosystem supports a wide range of mammals (well over 50 of the larger species) and birds (over 400 species). It has a mixed topography of plains, acacia woodland, rocky thorn bush, swamps, and marshes. This diversity, along with a long dry season, ensures excellent viewing of the large concentrations of African animals living in this natural habitat. The roads in Amboseli have a loose surface of volcanic soil that is dusty in the dry season and impassable in the wet season. 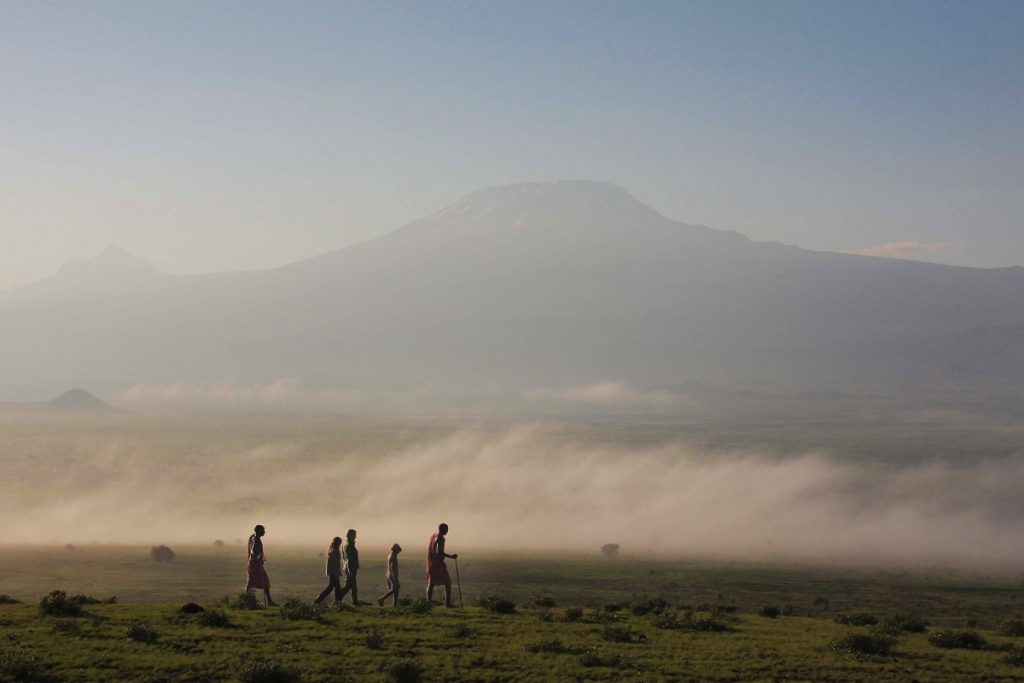 Full day in Amboseli with game drives in the morning and afternoon to explore the park. View large herds of elephants, renowned to be residents of this park. Amboseli is popular with breathtaking views of Kilimanjaro and reliably good elephant viewing. Nature lovers can explore five different habitats here ranging from the dried-up bed of Lake Amboseli, wetlands with sulfur springs, the savannah, and woodlands.

You can also visit the local Maasai community who live around the park and experience their authentic culture. Animals to be found here include the leopard, cheetah, wild dogs, buffalo, elephant, giraffe, zebra, lion, crocodile, mongoose, hyrax, dik-dik, lesser Kudu, and nocturnal porcupine. There is also a prolific birdlife featuring 600 species. Later on in the evening return to the lodge for dinner and overnight. 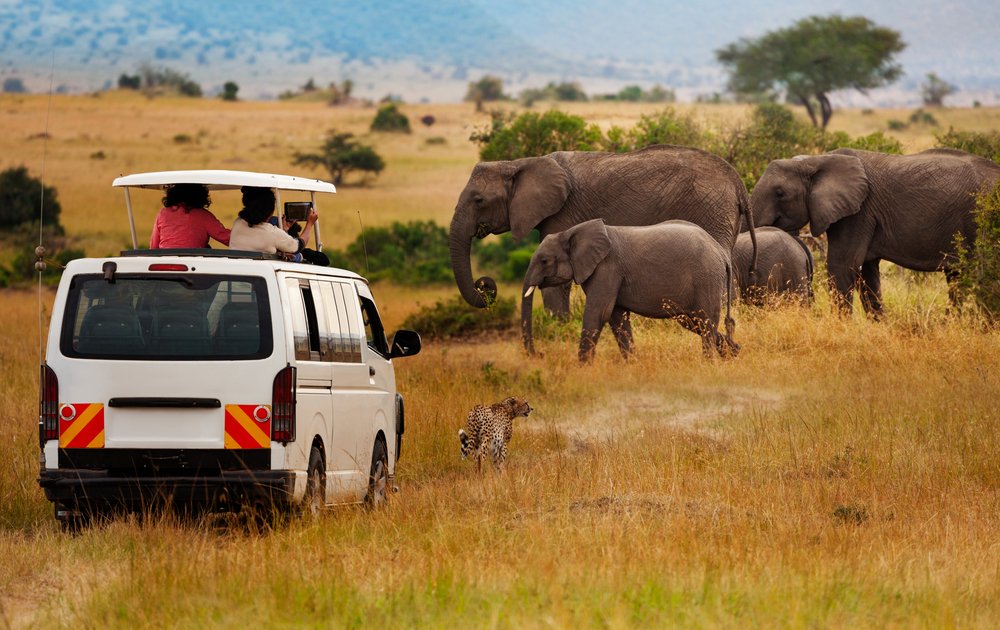 After breakfast depart from Amboseli via Nairobi to Lake Naivasha, a freshwater lake located on the Great Rift Valley Floor. You will arrive in good time for lunch and siesta. You will then enjoy a scenic sunset boat cruise to see the hippos and walk on Crescent Island among wildlife, and herbivores only. The waters of the lake draw a great range of game to these shores. Giraffes wander among the acacia, buffalo wallow in the swamps, and colobus monkeys call from the treetops while the lake’s large hippo population sleeps the day out in the shallows.

Crescent Island is a private Wildlife Sanctuary on the eastern side of Lake Naivasha. The Island features more animals per acre than any other park in Kenya. Here you can enjoy a fantastic and easy guided walking safari (around 1 hour on a plain terrain) surrounded by a variety of animals including giraffe, zebra, Thompson’s and Grant’s gazelles, waterbuck, eland, and indeed many bird species. It’s also common to spot hippos bathing or basking in the sun close to the island shores. The Island is not fenced, and the animals are free to roan to and from the mainland. Later have dinner and overnight at a lodge in Naivasha

From the hotel in Lake Naivasha, drive to Lake Nakuru (120 km – 1 hour 30 minutes). Enjoy game drives in Lake Nakuru National Park for game viewing drives. It is a shallow alkaline lake where visitors can enjoy the wide ecological diversity with varied habitats that range from Lake Nakuru itself to the surrounding escarpment and picturesque ridges.

The game drive is the main activity at Lake Nakuru. Foragers, grazers, hunters, and scavengers all play their roles in the natural existence of Nakuru. The park also has over 450 bird species including the flamingos. The national park is ideal for bird watching, hiking, picnic, and game drives. The park is famed as one of the world’s greatest ornithological spectacles. Lake Nakuru National Park is also home to zebras, gazelles, Rothschild giraffe, impala, black and white rhino sanctuary, and other large mammals. Continue with an afternoon game drive and return to the lodge for dinner and overnight.

Drive to Masai Mara Game Reserve arriving in time for lunch. Masai Mara National Reserve is a pristine wilderness of haunting beauty, it promises its visitors a profusion of wildlife, prolific birdlife, and the unprecedented opportunity of catching up with all the members of the ‘Big Five in one morning. 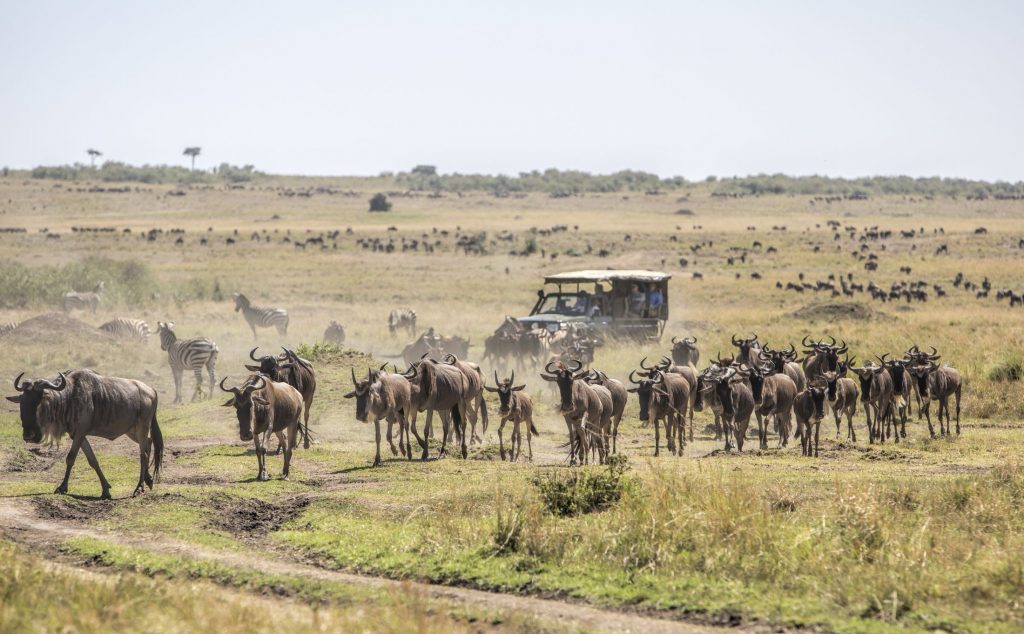 The 1,800 sq. kilometers of this veteran reserve offers the classic mix of African imagery; miles of lion-gold grasslands, shoals of lilac-misted hills, a meandering river, acres of thorn-bush, and mile upon mile of undulating wilderness. Game viewing in the Masai Mara is excellent all year round thanks to the diverse population of resident game, including the Big 5 – lion, leopard, elephant, buffalo, and rhino – plus popular species like zebra, giraffe, hyena, eland, and gazelle.

Afternoon game viewing to spot the Big Five as your introduction to the park. Masai Mara is arguably Kenya’s most popular game sanctuary. It is the most famous and most visited game reserve in Kenya. The film ‘Out of Africa’ was made to a great extent in this reserve. Virtually every type of wildlife can be seen at the Mara. A spectacle worth seeing is the annual migration of millions of wildebeest, zebra, and gazelle from Serengeti plains across the Tanzania border and the Mara River to reach Masai Mara grazing fields in late June. The dramatic crossing of the river and the preying on the migrants by predators can be viewed from early July to August. The reserve abounds with birdlife close to about 452 species recorded.

This day you will spend a full day in the Maasai Mara National Reserve with morning and afternoon game drives. The reserve offers one of the best opportunities to see cheetahs and lions in Africa. A visit to this reserve in July will allow you the best chance to witness and watch firsthand as thousands of wildebeests migrate across the swollen crocodile-infested Mara River.

The migration is a dramatic mass movement of almost two million wildebeests, zebras, and gazelles in a seasonal annual cycle driven by rainfall. In order to reach Masai Mara’s fresh grazing, wildebeests make dramatic river crossings, facing enormous crocodiles to feast on the Mara plains and regain their strength. Meals, dinner, and overnight at lodge

Day 8: Transfer from Masai Mara to Nairobi then to Arusha.

Leave, Masai Mara early morning then transfer to Nairobi where you, later on, have a transfer drive across the Namanga border to Arusha city of Tanzania. Arrive in the evening in time for dinner and an overnight stay. Accommodation and dinner at Green Mountain Hotel

From Hotel, you will be picked up for a transfer to Arusha city which is Tanzania’s safari capital. The city tour includes a visit to the Tanzanite market where you will find great craft and can have the opportunity to do shopping before your departure. Accommodation and dinner at Green Mountain Hotel

From the hotel after breakfast, you will then be picked up at the hotel in Arusha then transfer to Kilimanjaro Airport for a departure flight back home.