Uganda Big 5 safari cannot be undertaken in one single reserve ever since the southern white rhino got extinct in the country in the 1980s. However, the rhinos were reintroduced in the country and bred in the Ziwa Rhino Sanctuary where they can be seen during the amazing rhino tracking experience.

What are the Big Five African Animals?

The Big Five African animals is an old hunting term which highlights the five animals that were most prized by trophy hunters back in the 1800s.

The five were considered to be the most challenging and dangerous animals to hunt on foot. The Big 5 animals are the African Elephant, Lion, Leopard, Rhinoceros and Cape buffalo. In the 21st century, travelers still love to see the big five, however, not for trophy hunting but more of seeing and photographing now.

The only weapon to shoot the Big five during a Uganda safari is now by camera as they can be seen in the savannah parks and Rhino sanctuary.

An African Buffalo is an ox species that is adaptable and a widespread creature that lives in large herds in the savanna and also in smaller herds in the forested areas. An African buffalo is reportedly the most dangerous of all African game species most especially when it is wounded or solitary, thus its reputation manifests it being recognized as one of the Big five worldwide. 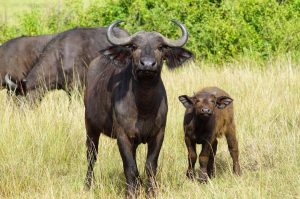 An African Buffalo can easily be distinguished from any other animal. The African Buffalo is generally dark black colored and has horns that are smaller and lighter curving outwards, backward and upwards. The buffalos are large and have even toed ungulates.

African Buffalo occupy the Africa’s woodlands, riverine valleys, marshlands sub-Tropical savanna, Eco tones of broadleaf montane forests, which are usually associated with abundant tall, sweet grasses, ample surface water, mud bath and sufficient shrub and trees for refuge. African Buffalos, however try to avoid areas of open plain grasslands without woody shelter. They are remarkably social and congregate in herds that range from a few individuals to over a thousand buffalos, and basically form two types of mixed herds , the one with mixed-sex and the other having mixed-age.

African Elephant is the world’s largest land mammal and perhaps the most enduring symbol of nature’s grace and fragility. An African elephant is also one of the most intelligent and entertaining to watch. 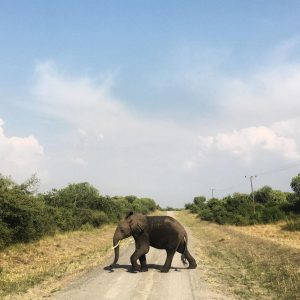 A fully grown male African elephant has an average weight of 6300 kilos, however the smallest adult male rarely dips 4000 kilos. The female elephants however on normal conditions weigh just over a half of the weight of the male.

The height however varies slightly more than the weights with the tallest male being 4 meters tall and the tallest female 3.4 meters.

The other obvious difference apart from the overall size among the female and the male is that the female have got the angular forehead while the male’s forehead is more rounded. An elephant is remarkably known for having the largest brain of all other live mammals which can weigh up to 6 kilos. An African elephant uses its tusks as both tools and weapons.

The leopard is the most common Africa’s large felines and often lives in close proximity to humans, however they are rarely seen because of its secretive, solitary nature. According to the ecological and ethological attributes, the leopard is an exceptional adaptable predator.

Leopards in undisturbed conditions occupy every part in Africa south of Sahara apart from the most arid areas. Leopards are most habituated in the woodlands, thorn bush areas, lowlands, and also occupy the montane forests of Africa.

Leopards remarkably have high capacity of adapting to changes in the prey species, the hunting conditions, carnivore competition, the vegetation patterns and human activities, these abilities have manifested their existence in developing Africa more successfully than any other large wild animal.

In Uganda, leopards differ from any other type of carnivore since sightings of their species are more often outside the protected areas. Leopards hunt using their stealth and power, often winning 5 meters of their intended prey before they pounce, and habitually store their kill onto a tree, keeping it away from large predators.

An African lion is the largest and most imposing African carnivore. The lion is remarkably the most sociable of the large cats which live in loose structured prides typically of about five to fifteen animals. In different cultures, lions have different significant importance and in Uganda, they enjoy the reputation of being the kings of the beasts, and are popular symbols of royalty, strength and bravery. 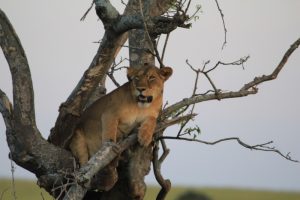 The lion societies in which they live in are more common to those of chimpanzees, they have different home ranges that overlap so that they regularly meet and come together.

The males are usually thrown out of the group at the age of about 3-4 years by the dominant male at that time, however, after several years that range between 7 and 10, these grown-up lions will try to fight to take on a group. The females however live in one area and their mothers usually move to the adjacent prides.

The rhinoceros are commonly known as the rhino. A Rhino is a large herbivorous mammal that is commonly identified by their horned snouts. Rhinoceros have got massive bodies that can be internationally recognized with stumpy legs and either one or two dermal horns. 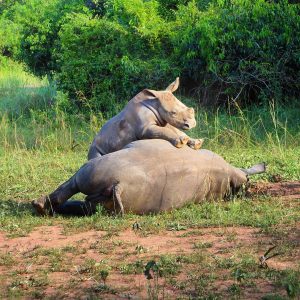 Rhinoceros vary in species and some species, the horns may be short or not obvious. The biggest and most common species include the Africa’s white rhino and Asia’s greater one-horned rhino. Rhinos are well known for their poor eyesight, however have got a well-developed sense of smelling and hearing.

Rhinos in Uganda have been hunted nearly to extinction since the animals horns are used in folk medicine for their supposed healing properties.

The Rhino horns are also some times sold as trophies or decorations, however in most cases they are ground up and used in Chinese medicine. The horns are believed to heal aphrodisiac, hangover cure and fever.

In Uganda, the common species are the Black Rhinoceros and the White Rhinoceros and can be found in the Ziwa Rhino Sanctuary, which is in Nakasongola district on the Gulu highway a few kilometers from Murchison Falls National Park.

To have a Big 5 Safari in Uganda therefore, a tourist must explore the Big Four animal habitats and combine the wildlife safari with Ziwa Rhino Sanctuary. The Buggalo, Rhino, Lion, Leopard are the traditional Big Five African safari animals. However, today, Uganda tours offer the Big 5 safari in Uganda plus the mountain gorillas and chimpanzees. These primates of the gorillas and apes can be well customized and suitably combined into a Big Five safari in Uganda.