Ziwa Rhino Sanctuary: The Rhino Paradise in Africa. Ziwa Rhino Tracking Sanctuary Uganda’s Only Home Of Rhinos In The Wild. Africa’s Rhino Paradise has been reopened to tourists by Uganda Wildlife Authority after its closure in mid-April. The Ziwa Rhino Sanctuary that sits on 16,000 acres of land and habitat for 33 endangered white rhinos was earlier closed in mid-April following wrangles from the Ziwa Rhino and Wildlife Ranches (ZRWR) that owns the land where the rhinos are bred and the Rhino Fund Uganda, a non-Governmental Organization that manages the rhinos. 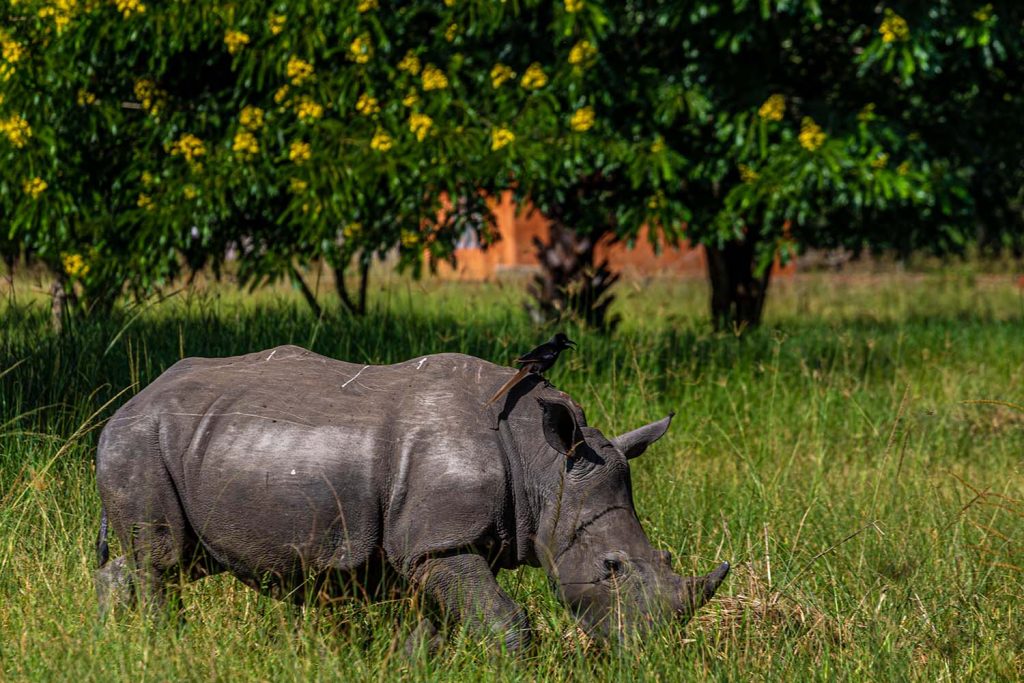 During the time of closure, the Uganda Wildlife Authority (UWA) stated that it had been realized that the conflicts could potentially compromise the safety of the rhinos and they took the decision to avert the threat by a temporary measure of closing the sanctuary until the two parties reached an agreement. This closure led to a very great impact on Uganda’s tourism with many safari itineraries changed. The Rhinos are one of the sought-after African Big Five and therefore tracking them at the Ziwa Rhino Sanctuary has been a great opportunity for wildlife enthusiasts. With the fact that Ziwa Rhino Sanctuary reopened to tourists on Thursday 10th June 2021 it is now very much possible to include the Rhino tracking experience as part of the available Uganda safari activities in 2021.

The Ziwa Rhino Sanctuary in Uganda is located approximately 180 kilometers an equivalent of 110 miles by road north of Kampala in Nakasongola district in Nakitoma Village within the Kafu River Basin along the Kampala Gulu highway. The Ziwa Rhino Sanctuary harbors Uganda’s wild endangered Rhinos. The massive wars in the early 1970s led to serious killings, increased poaching and hunting of Rhinos and by 1983 an extinction of Rhinos in Uganda was experienced. The Ziwa Rhino Sanctuary was established by the Rhino Fund Uganda in collaboration with the Uganda wildlife Authority in 2005 to reintroduce the southern white Rhinoceros in Uganda with the major goal of the sanctuary suited to build a sustainable Rhinoceros population and to relocate the Rhinos to their original areas within the Country’s protected areas.

The Rhino Paradise in Africa

The Ziwa Rhino Sanctuary is the only place in the pearl of Africa where the rhinos can be observed in their original setting and here visitors can track rhinos on foot. Watching the white rhinoceros offers a great experience that can’t be found anywhere else in the country. As for 2005, the sanctuary was established with only a total of six animals with four of them that were bought from Solio Ranch found in Kenya and the other two of the animals were donated from Disney’s Animal kingdom that is found in Orlando, Florida in the United States. The security at Ziwa Rhino Sanctuary is tight at the 24-hour watch with approximately 78 member team of amazing trained park rangers and security guards ensuring the safety of the Rhinos. The security was improved after the acts of the 1970s. The Sanctuary seats on 70 square kilometers that are surrounded by a 2 meters six by six electric fence keeping the Rhinos in and away from the intruders.

The Ziwa Rhino Sanctuary also harbors a number of bird species, reptiles, and over 40 mammal species which include the antelopes, crocodiles, hippos, monkeys and so many others. The Ziwa Sanctuary offers a great thrilling experience with so many things to do for instance bird watching and visitors can also have nature-guided walks through the sanctuary. However, Rhino tracking is the major activity in the Sanctuary and the main source of fame Sanctuary. The spiced rhino watch with skilled ranger guides from a safer distance offers an awesome experience, a unique activity that grants you with a chance to see rhinos on foot where you can get close to the rhinos to as near as 6 to 7 meters wow what a great distance to see the rhinos.

The sanctuary harbors over 350 bird species and the major ones spotted include; the Blue Spotted Dove, the Shoebill Stork, Abdim’s Stork, African Black Crake, Giant Kingfisher, Barbets, White Crested Turaco, and many more others. These offer a great chance to carry out activities of birding where one can spend a full or a half-day of the time birding. The birding can be done either on a nature-guided walk or on the boat where you will be joined by a trained bird guide. The Lugogo Wetland within the area is arguably Africa’s richest birding destination and many efforts are being laid to declare it officially a wildlife conservancy.

Nature Walks offers a wonderful experience of nature as it increases your knowledge of Nature. At Ziwa Rhino Sanctuary Nature Walks are done and one of the thrilling experiences you can possibly experience in the Pearl of Africa. The Nature Walks at Ziwa Sanctuary involve many activities such as hiking through the Sanctuary where you can have a great chance to spot many animals like the Oribs, reedbucks, gray duikers, bushbucks, hartebeests, monkeys, monitor lizards, and butterflies.

A night walk is another exhilarating activity that will leave your heart pumping and normally start at around 9 pm or 10 pm. It offers a great opportunity to one of Uganda’s elusive Leopards or Aardvark. Walking with only your flashlight to clear the dark is a hilarious activity you can ever do. Now that the Ziwa Rhino Sanctuary reopened to tourists, you can go ahead and plan on seeing the 33 white rhinos that are surviving there as they still have the luck too. You can visit the sanctuary as part of a Short Uganda Safaris to Murchison Falls National Park with our popular 3 Days Murchison Falls Safari or as part of a long and well customized Uganda safari itinerary.