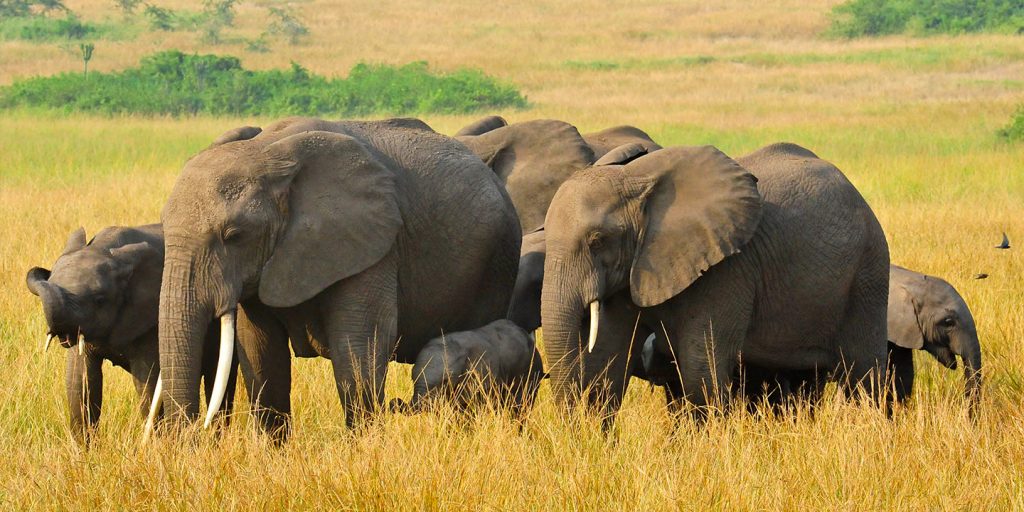 Queen Elizabeth National Park occupies an estimated 1,978 square kilometers (764 sq mi). The park extends from Lake George in the northeast to Lake Edward in the southwest and includes the Kazinga Channel connecting the two lakes. Queen Elizabeth Park is known for its wildlife viewing, including African buffalo, Ugandan kob, hippopotamus, giant forest hog, warthog, Nile crocodile, African bush elephant, African leopard, lion, and chimpanzee. It is home to 95 mammal species and over 500 bird species. The area around Ishasha in Rukungiri District is famous for its tree-climbing lions, whose males sport black manes. Poachers killed six elephants in the park in 2015, triggering both anger and frustration within the Ugandan conservation community. Queen Elizabeth Park together with the adjacent Virunga National Park is a Lion Conservation Unit. The area is considered a potential lion stronghold in Central Africa if poaching is curbed and prey species recover. Queen Elizabeth Park is also famous for its volcanic features, including volcanic cones and deep craters, many with crater lakes, such as the Katwe craters, from which salt is extracted. Services in the park include a telecenter run by Conservation Through Public Health and the Uganda Wildlife Authority, neighboring the Queen’s Pavilion, park lodges, game, and scenic drives, and boat launches.

1. In which district is Queen Elizabeth Park

Kasese district: The national park is located in Kasese district about 410km away from Kampala, the capital city of Uganda. There are different routes that can make you access Queen Elizabeth Park such as, by plane, car, self-drive car, or bus.

2. How far is Queen Elizabeth National Park from Kampala

The park is approximately 400 kilometers (250 mi) by road southwest of Kampala, Uganda’s capital, and largest city.

3. How big is Queen Elizabeth Park

5. How do you get to Queen Elizabeth National Park

The drive takes at least seven to eight hours, but your itinerary will most likely include some parks on the way. It is possible to fly to any of the nearby airstrips of Kasese, Mweya, or Kihihi (for Ishasha) by scheduled or chartered aircraft from Entebbe International Airport or Kajjansi Airfield near Kampala.

Amazing wildlife, a huge variety of birds, and primates are typical for the Queen Elizabeth National Park, located right at the border to DR Congo. Queen Elizabeth National Park stretches over a huge area from north to south where each part has its own distinct vegetation and landscape. Herbivores such as elephants, cape buffalos, topis, waterbucks, and Ugandan kob are widespread all over the park. Lion, leopard, and spotted hyena are the main predators. During our game drive from the Ishasha sector to the Kazinga channel, we were incredibly lucky to spot Ross’s turaco and a group of red-tailed monkeys.

The famous Kazinga channel connects Lake George with Lake Eduard and is home to hippos, crocodiles, and many species of birds like cormorant, pelican, stork, and kingfisher. Especially the pied kingfisher can be found in big numbers. Welcome to our birding and wildlife safari to Queen Elizabeth Park and the Kazinga channel in Uganda in August 2019. We stayed two nights at the wonderful Ishasha Wilderness Camp in the Ishasha sector and two nights at the Katara Lodge located right at the edge of the rift valley near the famous Kazinga channel.