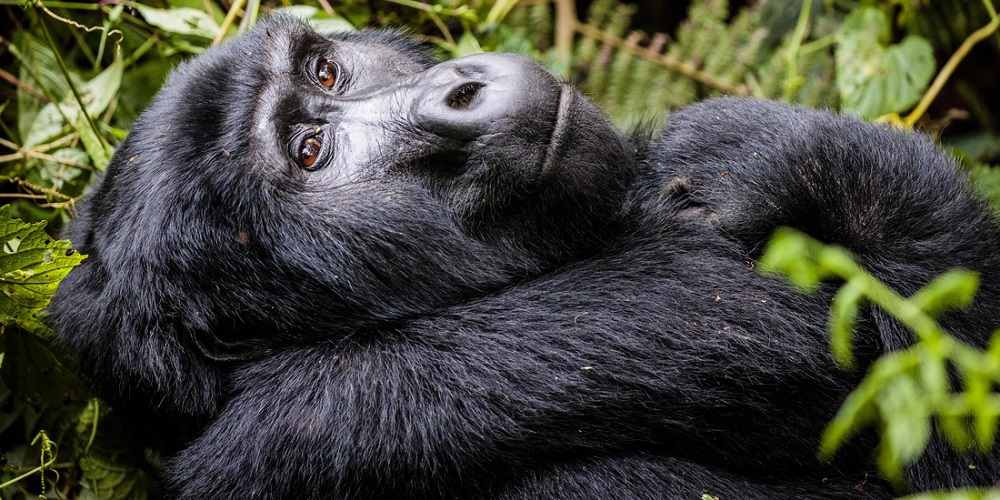 Bwindi Impenetrable forest is one of Uganda’s oldest and most biologically diverse forests dating back to 25,000 years and containing almost 400 plant species. Most famously within the forest are about 480 mountain gorillas, some of which are habituated for gorilla trekking in Uganda whereas some are not yet fully habituated and tourists can visit for a Gorilla habituation experience. With the mountain Gorillas in Bwindi, the forest is also home to almost 120 mammal species, 348 species of birds, 163 tree species, and more than 1000 flowering plants. With diversity in this forest, there is an increase in the need to visit the park therefore here is the most relevant information to know before you visit Bwindi Impenetrable National Park.

Wondering which district Bwindi Impenetrable National Park is found/Located? The park covers parts of the districts of Kanungu, Kabale, and Kisoro. These districts are found in southwestern Uganda close to the border with the Virunga Volcanoes that border Rwanda and the Democratic Republic of Congo. The park is nestled within a very beautiful region of the country. It is part of the Bwindi Impenetrable Forest covering 321 square kilometers and rising to an altitude of 1,160m – 2,607m above sea level.

How to Get to Bwindi Impenetrable National Park

Depending on your destination, the park can be reached by road using different routes. From Kampala, Bwindi Impenetrable National Park is an 8.5-hour drive via Kabale-Mbarara Rd and Mbarara-Masaka Rd which is the fastest route. Via Mubende-Fotable Rd the park is 10.5 hours drive. From Rwanda, it’s about a 5 hours drive from the capital in Kigali to Bwindi Forest National Park. This is closer and a shorter distance than that of the Ugandan capital and that’s why our 3 Days Gorilla Safari from Rwanda is one of the favorites as it saves the drive time.

During the rainy season, a 4WD is recommended.

Chartered flights can be organized from Entebbe International Airport or Kajjansi to either Kihiihi or Kisoro airfields. For gorilla trekking in Buhoma and Ruhija sectors, the Kihiihi airfield is the best option whereas the Kisoro airfield is best for tourists heading to Nkuringo and Rushaga sectors. A chartered flight to Bwindi Impenetrable National Park airfields lasts about 1 hr 45 min. From the airport, your Uganda Gorilla Safari guide will ensure your transfer to a prior booked accommodation facility depending on where you are going to trek. The transfer is by a 4×4 safari vehicle. Our 3 Days Bwindi Luxury flying Gorilla Safari is the best option for short gorilla safaris by flight in Uganda.

Wondering what is there to see in Bwindi Impenetrable National Park? Attractions in Bwindi are the natural inhabitants of the forest that many would want to glimpse at. There are several attractions to see in the Bwindi forest and here are the top things to see;

The Gorilla species in the Bwindi forest are the mountain gorillas that are living in their natural habitat. About 480 mountain gorillas live in the Bwindi forest and 19 gorilla families have been habituated for gorilla safaris in Uganda. Mountain gorillas here live in their natural habitat and are habituated in 4 different sectors of Buhoma, Ruhija, Rushaga, and Nkuringo. Mountain Gorillas are actually increasing in numbers because of the great conservation efforts.  Mountain gorilla families in Bwindi include the Rushegura, Habinyaja, Mubare, and Katwe gorilla groups for the Buhoma sector. Bitukura, Kyaguriro, Mukizo, and Oruzogo gorilla groups in the Ruhija gorilla sector, Bishasho, Nkuringo, and Christmas gorilla groups for Nkuringo gorilla sector and Nsonji, Mishaya, Bweza, Kahunjye, Businjye, Rwiji, Muchunguzi, and Bikyinji gorilla groups in the Rushaga sector.

Though popular for gorilla trekking in Uganda, Bwindi Forest has also been named the best birding destination in Africa. For all birders who would love to spot forest birds as well as the Albertine rift endemic birds, Bwindi is the best place to visit. The forest in the northern area hosts 76 of the 144 Congo biome bird species and 68 of 86 Afro tropical biome species. 23 out of the 24 Albertine Rift endemics can be seen in the Bwindi forest. Some of the bird species to look out for include the Rwenzori Nightjar, Short-tailed Warbler, Blue-headed Sunbird, African Blue Flycatcher, Common Bulbul, Chapin’s Flycatcher, Red-headed Bluebill, White-tailed Blue Flycatcher, Shelley’s Crimson wing, Handsome Francolin, and many more.

Primates and other wildlife species

Primates or any other kinds of wildlife are not the main attraction in Bwindi but still exist. Almost 120 mammal species are estimated to be living within the forest and these include about 10 primates. Some of the primates include the common chimpanzee, L’Hoest’s monkey, black and white colobus. In the forest can also be found about 27 species of frogs and 220 butterfly species.

Floristically, the Bwindi forest is one of the best places to explore because of the many floral species. Both the low altitude and high altitude primary Afromontane forests can be found in the park. The forest has about 220 tree species that form almost more than 50% of tree species in Uganda. More than 1000 flowering plants with about 100 fern species. In case you are interested in flora, Bwindi forest is one of the old and biologically diverse parks in Uganda that you should not miss visiting. 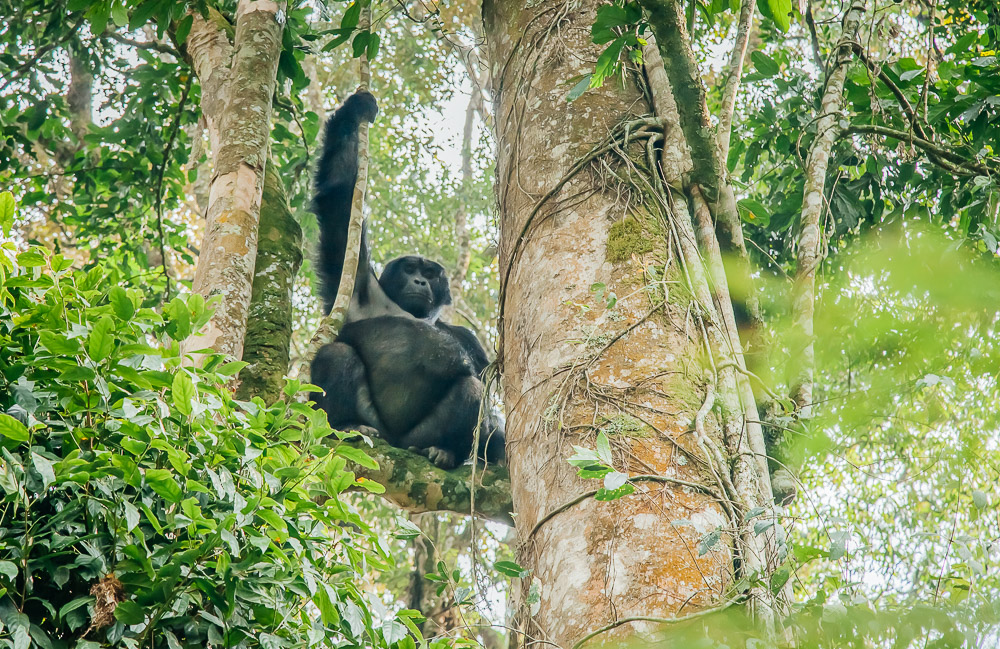 Spending more time with mountain gorillas means learning more about these elusive species. Unlike gorilla trekking where you spend only 60 minutes in the presence of a fully habituated gorilla family, for gorilla habituation, you spend 4 hours in the presence of non fully habituated gorillas. For gorilla habituation, Bwindi Forest National Park is the only destination that offers the activity world over. Tourists spend 4 hours learning about gorillas with the guidance of park rangers and gorilla doctors. Gorilla habituation in Bwindi costs $1500 per permit per trek.

With the variety of bird species in the forest, birders can have one of the best experiences. Bird watching in the Bwindi forest alone can take about 4 days with several sightings including the Albertine rift endemic bird species. Best spots for a birding safari in Uganda to Bwindi include the Mubwindi swamp, Buhoma water trail, River Ivi trail, and the bamboo zone. 23 out of the 24 Albertine Rift endemics can be seen in the Bwindi forest. Some of the bird species to look out for include the Rwenzori Nightjar, Short-tailed Warbler, Blue-headed Sunbird, African Blue Flycatcher, Common Bulbul, Chapin’s Flycatcher, Red-headed Bluebill, White-tailed Blue Flycatcher, Shelley’s Crimson wing, Handsome Francolin, and many more.

What is the Best time to visit Bwindi National Park?

Knowing the Best Time to Go to Bwindi Forest is key in making your Gorilla Safari Uganda memorable. The best time to visit Bwindi or to go Gorilla trekking in Uganda is during the dry season months when the rains are less. This is during the months of December – February, and June – August. During this time the roads are less slippery and therefore the park is very accessible. However, note that there is no such a time when the park is closed therefore gorilla trekking is done all year round. You can book your trip just depending on your schedule. The best time for bird watching in the Bwindi forest is during the months of March to September in the dry season. From November to April is the best time to spot migratory birds in the park. However, during the best time to visit Bwindi, it’s a peak season and therefore all bookings and payments should be done early to avoid missing out on permits or accommodation.

Lodges and hotels in Bwindi National Park offer accommodation to all kinds of travelers in all of the 4 sectors of the park. Accommodation ranges from Luxury, Mid-rage to Budget depending on the traveler’s choice and budget constraints. Here are just a handful of the lodges that you can choose to stay in while at Bwindi; Learn More

Buhoma Lodge is a top-quality and intimate lodge in Bwindi that commands spectacular and uninterrupted views of the Bwindi Impenetrable Forest National Park, home to the rare and elusive Mountain Gorillas. Buhoma Lodge is one of the only two lodges situated within the National Park just a short walking distance from the meeting point for gorilla tracking and other activities in the area. This is a great place to start your gorilla trekking adventure. The lodge has an elevated central lounge area, complete with bar, dining, and spa facilities that offer a cozy, comfortable environment to discuss the day’s activities around the fireplaces which add atmosphere and warmth in the cool evenings.

Clouds Mountain Gorilla Lodge is remote, intimate, and beautiful over 2,000 meters above sea level, probably the highest altitude lodge in Uganda. This is an award-winning lodge that offers accommodation of a kind. Imagine sitting up on a ridge, above the clouds, looking across to the Virunga volcanoes and behind you is the primordial impenetrable forest of Bwindi. The lodge is just a walkable distance from the Nkuringo trailhead for gorilla trekking. Guests at Clouds Mountain Gorilla Lodge stay in their own cottages built of local volcanic stone. Each cottage has a large sitting room, fireplace, armchairs, and hand-woven carpet. Other luxury accommodations in Bwindi forest include Chameleon Hill Lodge, Gorilla safari lodge, Trackers safari lodge, and many more.

Nkuringo Bwindi Gorilla Lodge is 2161m above sea level on the Nteko ridge overlooking a beautiful swath of the World-renowned Bwindi Impenetrable Forest National Park. The ridge provides a superb vantage across the Kashasha River Valley to the forested hill known as ‘Nkuringo’ and the surrounding swathe of trees of the Bwindi Forest. This section of forest is home to the three Nkuringo Gorilla families of Mountain Gorillas from where the Lodge provides a prime access point to the start of the amazing activity. The Lodge has panoramic views of the majestic volcanoes of the Virunga chain, across the escarpment into the Albertine Rift Valley within the DRC Congo.

Rushaga gorilla camp is one of the beautiful lodges in Bwindi Impenetrable Park where you can spend your night before or after gorilla trekking. Bordering the Bwindi Park, the Gorilla Camp is comprised of a mountain landscape, lush accommodation with nice vistas of the forest front and a permanent spring where forest elephants occasionally come down for a drink from the national park. Other mid-range accommodation facilities in Bwindi include the Gorilla Valley Lodge, Silverback Lodge, ichumbi Gorilla Lodge and many more.

Broadbill Forest Camp is a calm and peaceful lodge with fantastic views of the Bwindi Forest making it a perfect place to unwind and relax during your Uganda gorilla trekking safari. The Camp derives its name from the globally threatened African Green Broadbill which is one of the bird species in the forest.  Broadbill Forest Camp is located at the very edge of Bwindi forest offering good views and bird watching spots even from your balcony.

Buhoma Community Rest Camp offers 6 well-furnished and self-contained safari tents, 3 self-contained cottages and 2 nonself contained twin cottage Bandas, All of the Bandas are built with local materials and are of African architectural design. The rest camp also has a 6-bed dormitory with several campsites. Other budget lodges in Bwindi include Buhoma community Bandas, Bwindi backpackers lodge, Engagi Lodge, and many more.

Note: Booking accommodation in Bwindi Forest National Park can best be done by a local tour operator and this can be done according to the booked gorilla permit for your trek.