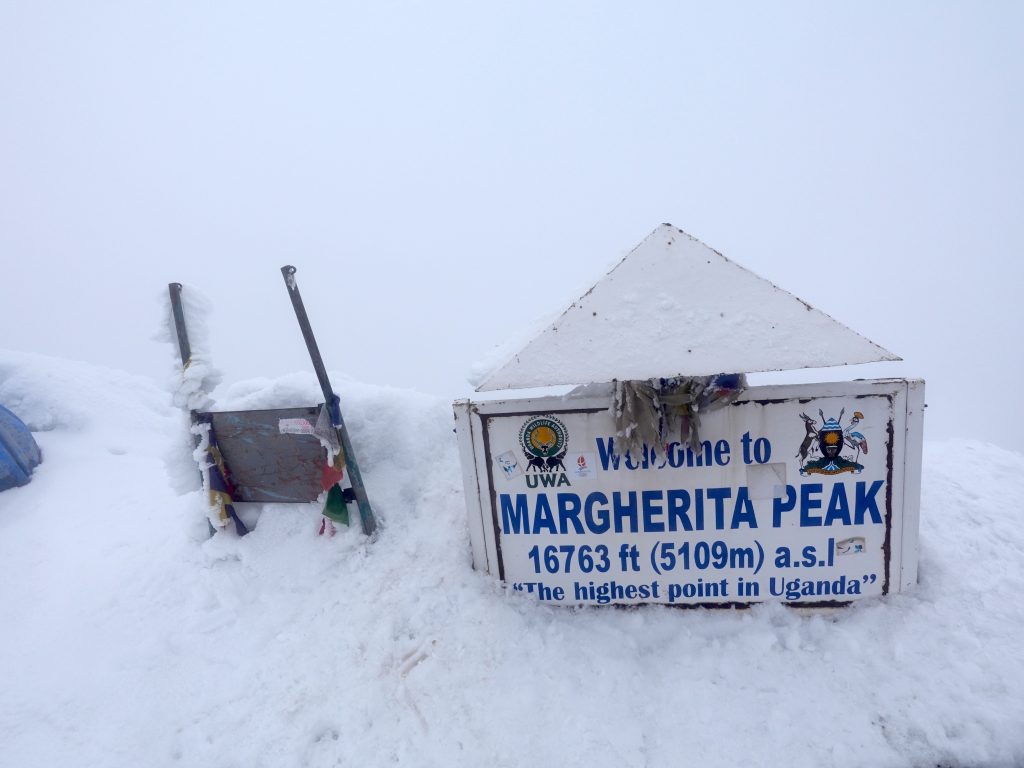 What is the highest point in the Rwenzori Mountains National Park?

The highest peak of the Rwenzori Mountains National Park is Mount Stanley (named after explores Sir Henry Morton Stanley) on the Margherita peak at 5,109 m (16,762 ft.). The peak rises between Lake Albert to the north and Lake Edward to the south on the Congo border. The Margherita Peak is the highest mountain of both Uganda and the Democratic Republic of Congo and the third highest peak of Africa after Mount Kenya at 5,199 m and Mount Kilimanjaro at 5895 m above sea level.

The Rwenzori Mountains are worth visiting and trekking because;

Why is Mountain Rwenzori Called a mountain range?

Rwenzori also spelled as Ruwenzori are a range of mountains in eastern equatorial Africa. The Rwenzori Mountains are host to Mount Stanley (5,109m), Mount Speke (4,890m), and Mount Baker (4,844m), which are Africa’s third, fourth and fifth-highest peaks. Other peaks that form the Rwenzori mountain range are Mount Emin (4,798 m), Mount Gessi (4,715m), and Mount Luigi di Savoia which is named after the Duke of Abruzzi who was the first to climb most of the 6 massifs that form the Rwenzori Mountain Range.

The Rwenzori Mountains National Park is indeed a range, unlike the free-standing Mount Kilimanjaro which is Africa’s free-standing mountain.

We also go ahead to show you how to best plan your safari as well as offer you sample packages with a free quote to help you plan your Climbing Safaris to Rwenzori Mountains National Park Uganda.

This is the ultimate hiking destination in Uganda with the highest peak at 5,109 m above sea level. Hiking these mountain ranges is strenuous and lasts for about 8 days, however, there are also less tiring hikes that include nature walks and day hikes on the slopes of the mountain.

Rwenzori Mountains National Park is a Ugandan national park and UNESCO World Heritage Site located in the Rwenzori Mountains. Almost 1,000 km2 (386 sq. mi) in size, the park has Africa‘s third highest mountain peak and many waterfalls, lakes, and glaciers. The park is known for its beautiful plant life.

Giant Lobelia forms the beautiful vegetation of the Mountain slopes. The Mountain Rwenzori in Uganda also hosts over 70 mammal species, 217 bird species including 19 Albertine rift endemics. Hiking or mountain climbing Safaris to Uganda can be combined with bird watching tours.

When is the best time to climb the Rwenzori Mountains?

The rainy seasons are in the months of March to May and November.

The best routes to trek the Rwenzori Mountains National Park are the two routes are Central circuit routes as well as the Kilembe trail route. Climbing Mountain Rwenzori to the highest peak of the range which is Margherita Peak at 5107 meters above sea level is a great achievement for many hikers.

Trekking the Rwenzori Mountain National Park is such a perfect way of having such a wonderful climbing experience. Book well customized Rwenzori trekking expeditions and have the chance to choose the most suitable hiking route for your next trip.

The Central Circuit Route Trail is the only traditional route that approaches the Rwenzori mountains from the East. The route is currently managed by Rwenzori Mountaineering services with Kabira Safaris & Tours. Following this route leads you to Mount baker, Mount Stanley, Mount Speke.