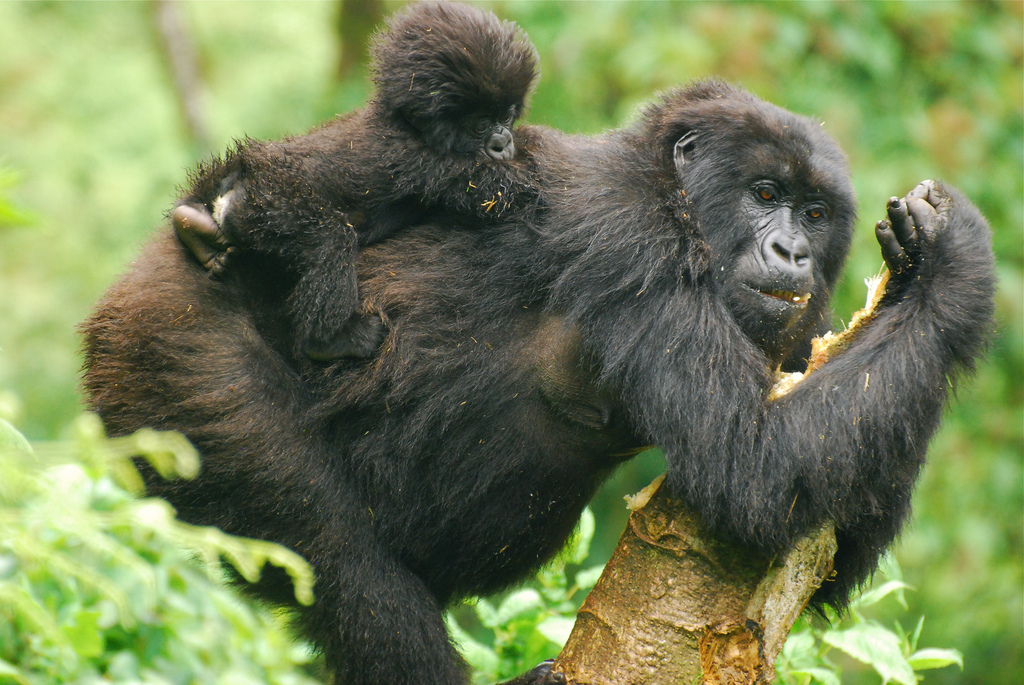 With an estimated natural population of more than 300,000, western lowland gorillas are by far the most prevalent subspecies. They aren’t quite as safe as that number would imply, though, given the dangers they encounter, their dwindling population, and their poor reproducing rate. The Cross River gorilla, the other subspecies found in the West, is significantly uncommon and experiencing a rapid decrease. It is regarded as extremely vulnerable to extinction and has a population of only about 250.

Eastern lowland gorillas, commonly known as Grauer’s gorillas, have experienced severe declines in recent years. Between 1996 and 2016, their population fell by 77%. There are believed to be less than 3,800 left in the wild. Mountain gorillas provide a rare glimmer of optimism for gorilla conservation even if they are still endangered and in danger. Although there are only roughly 1,000 of them, this is a significant increase from the early 1980s when there were only 240 of them. That number is currently thought to be 1,069.1 as a result of “extreme conservation” over the past few decades, which included extensive day-to-day preservation of gorilla families.

6 Days Uganda Safari offers a chance to have the best Gorilla trekking tour experiences as well as have great game viewing experiences in one of the most popular safari parks.

The nature and intensity of the threats to all four gorilla subspecies vary depending on the region. Overall, poaching, infectious diseases, the loss of their habitat, and habitat fragmentation pose the greatest threats to wild gorilla populations.

Even though gorilla hunting, killing, and consumption are all prohibited, the illegal bushmeat trade has decimated wild gorilla populations in many crucial gorilla habitats.

According to the International Union for Conservation of Nature, gorillas are occasionally the target of poachers, but they also frequently become prey for opportunistic hunters and snares intended for other animals (IUCN). The main threat to both western and eastern lowland gorillas is poaching, which is becoming more of a problem as logging and mining routes make it simpler for poachers to enter and exit impenetrable woods.

The IUCN lists disease as the second-leading factor in the reduction of western lowland gorillas after poaching. Since the 1980s, a succession of great ape die-offs, the worst of which frequently had fatality rates as high as 95%, have been particularly caused by the Ebola virus.

A full recovery is said to take 75 to 130 years, and that’s only if all poaching ceased, which the IUCN says is “an implausible scenario.” Populations in protected regions started to recover in roughly a decade, according to study. Both Cross River and eastern gorillas are highly vulnerable to human disease transmission.

All great apes, including gorillas, are under risk from habitat loss, though the hazard varies depending on the location.

Oil-palm plantations and large-scale mining, for instance, pose a growing threat to western lowland gorillas because they directly destroy habitat and open up development corridors that can further partition the forest and isolate gorilla groups.

The main cause of habitat loss for many Cross River and eastern gorillas is expanding human settlement, which frequently results in the removal of forest through illegal logging or the expansion of communities, agriculture, and pastures. Cross River gorillas are said to have lost 59 percent of their habitat just between 1995 and 2010.

3 Days Gorilla Trek Rwanda is a Safari for Travellers Planning a trip to Rwanda. A Rwanda Gorilla Trekking Permit costs US$ 1500 each.

What Can We Do to Help?

About 10 million years ago, humans and gorillas had a common ancestor, and we still share about 98 percent of our genetic makeup today. Although gorillas are near relatives of humans, this is by no means the only reason we should assist them. Gorillas contribute to their ecosystems by doing things like spreading the seeds of the fruit they eat as they traverse wide areas of woodland. They are also extremely sophisticated social beings that should exist even if it does not benefit the environment around them.

We owe gorillas a helping hand because human actions are mostly to blame for their problems. Here are some ways you may help.

The pressure from risks like disease, habitat loss, and poaching is being lessened by conservationists. Supporting organizations like the Dian Fossey Gorilla Fund (DFGF), the African Wildlife Foundation (AWF), or the World Wildlife Fund (WWF), to name a few, can help such efforts. The Virunga Fallen Rangers Fund, which offers “vital support, employment, and training to the widows and children of those Virunga Rangers killed in the line of duty,” is another gorilla sanctuary you can directly help. It is located in the Democratic Republic of the Congo (DRC).

Mountain gorilla populations are beginning to recover, which has made them more valuable alive than dead to local businesses. Part of this is attributed to responsible tourism. This only works if tourists can be controlled and local residents are involved and able to gain from conservation initiatives. Given the possibility of exposing wild gorillas to disease, visitors to mountain gorillas are advised to keep at least 7 meters (21 feet) away and cancel their trip if they are ill.

According to the Dian Fossey Gorilla Fund, mining in the DRC is causing eastern gorillas to lose their natural habitat, and these mines are frequently built to extract metals for use in future telephones and other devices. For example, eastern gorillas are thought to be particularly vulnerable to the mining of the mineral coltan. We can aid in lowering the demand for mining by recycling electronic products as much as we can. That would shield gorillas not only from habitat loss brought on by mining but also from the killing that frequently takes place when mining camps are established in dense forests. Local recycling options for electronics vary, but DFGF names Eco-Cell as one recycler that gives gorilla conservation a top priority.

The IUCN warns that the palm plantations that have long caused problems for Southeast Asia’s orangutans are increasingly likely to cause comparable destruction in the habitat of western gorillas. According to the organization, “as oil-palm plantations in Asia reach capacity, Africa is emerging as the next frontier for this commodity, presenting strong economic prospects in nations with suitable temperatures, soil, and rainfall patterns.” Unfortunately, that also applies to over 75 percent of the habitat for western lowland gorillas. The DFGF and other environmental organizations advise against purchasing items using palm oil unless they are made with certified sustainable palm oil to help lessen this threat.