The Fact Book about Mountain Gorillas – Everything You to Know 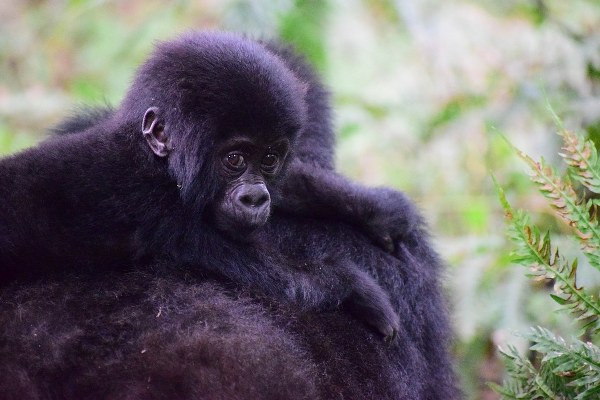 About the Mountain Gorilla

Mountain Gorillas are endangered according to the IUCN Red List.

Humans share about 95- 99% DNA with the gorillas depending on what is included. They are the next closest living relatives to human beings after the chimpanzees and bonobos.

They are one of the largest living primates weighing about 150 Kilograms.

They live in family groups with several individuals. A group of Gorillas is called a band or troop each led by a dominant Silverback who is the adult male in the group.

Gorillas communicate by different calls. These include short barks when they are curious, roars or hoots to intimidate rivals and struts.

Gorillas are social, and not dangerous to humans.

1. How many Mountain Gorillas are left in the world?

A specie once at the brink of extinction is now steadily increasing in numbers. The latest concluded census of the Mountain Gorilla population brings the total to 1063 individuals.

The Total Population Mountain Gorillas as of 2019 is estimated to have increased to 1063 individuals following the 2018 census in the Bwindi Impenetrable National Park and Sarambwe nature reserve ecosystem.

This is the largest population of mountain gorillas that has ever been recorded in these two habitats of the endangered great apes.

Mountain Gorillas are more darkly colored (the darkest of all) than the western Gorilla.

With the dark color the Mountain Gorilla also has the thickest hair with a longer face and broader chest.

Looking closely into the eye of a Mountain Gorilla, their eyes are dark brown in color with the iris framed by a black ring.

Gorillas move by what is known as Knuckle walking and rarely move bipedal (upright) for short distances especially during defensive situations.

Some Mountain Gorillas are also known to use knuckle walking as well as use other parts of their hands especially the back.

Both the female and silverback Gorillas live for up to 35 years and more in the wild. Mountain Gorillas do not live well in captivity due to several unclear reasons but most probably thought to be because of their complex diet that they can have well in the forests.

4. Where do Mountain Gorillas live? 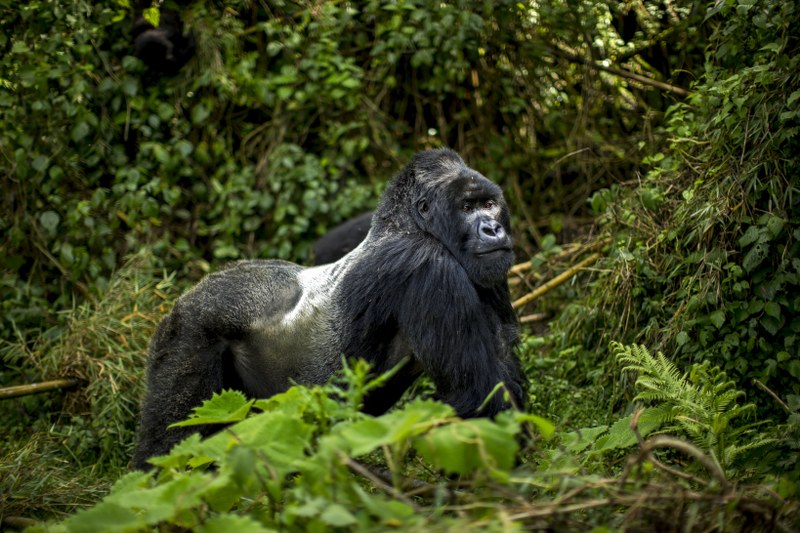 They live in 2 isolated groups, one in Bwindi forest and the other in the Virunga massif.

There are four National Parks in these three countries where Mountain Gorillas survive and can be trekked in the whole of world.

Facts about Mountain Gorilla natural habitats is that they live in Uganda, Rwanda and the Democratic Republic of Congo.

5. What do Mountain Gorillas eat?

At times, termites, ants and insects supplement their diet. They eat much more of fibrous foods and consume up to 250 plant species. Mostly, gorillas rely on food availability rather than diet selection.

Another fact about Mountain Gorilla diet is that since they consume a lot of vegetation, they rarely drink water.

Unlike other Gorillas, Facts on Mountain Gorillas –  live at elevations of up to 1,500 m – 4,000 m above sea level. At these heights, the temperatures can drop below freezing point, their thicker and longer fur keeps them safe here.

They are the only subspecies of genus Gorilla that have no capability to survive in captivity. To see them, you have to visit them in their natural habitat.

7. Why are Mountain Gorillas Important?

Gorillas, just like all other wild animals are so important. They play a great role in the environment since these large-scale grazers eat lots of vegetation. Without them, the natural balance in the food chain would be disrupted.

For the people in the countries where these giants live, their presence has created employment to thousands in the tourism industry. It has also led to improvement of the standards of living for those employed and as well surrounding communities that share from the proceeds.

8. How do Gorillas sleep?

Gorillas sleep in nests just like most of their primate colleagues. They sleep in nests that they patch either on the group or in trees depending on variables like vegetation and security. Each family builds a nest each day and they enter their nests before dark.

On the IUCN Red List, Facts on Mountain Gorillas – are marked endangered therefore at a risk of extinction. In a few years they were marked as critically endangered but thanks to the great conservation efforts, the numbers increased and therefore a move a step higher to endangered.

The main threats to the Mountain Gorilla population include habitat degradation, poaching and disease.

This 3 Days Rwanda Gorilla Safari from Kigali is best for Gorilla trekking in Rwanda’s Volcanoes National Park. A Rwanda Gorilla permit costs US$ 1500 each.

4 Days Rwanda Gorilla Safari is a Gorilla trekking safari in Rwanda best planned for travelers who would want to have a double Gorilla tracking experience.

3 Days Gorilla Trekking Safari Flying to Bwindi National Park is a 3 Days Luxury Gorilla safari to Bwindi Impenetrable National Park by flight to the nearest airstrip from the park.