How Do Gorillas Mate? – Courtship, Reproduction, and Breeding

The gorilla is the world’s largest living primate, and it lives in the lush forests of Central and Eastern Africa. These mostly herbivorous forest giants share 98 percent of their DNA with humans, making them our closest living relatives. There are two primary species of gorillas (the Eastern gorilla and the Western gorilla), and each is made up of two subspecies: mountain gorillas and eastern lowland gorillas for the eastern gorillas, and cross-river gorillas and western lowland gorillas for the western gorillas. You can learn more about the different types of gorillas by reading the article Types of Gorillas in the World.

A typical gorilla group is made up of newborns, juveniles, adult males and females, and a dominant male who leads and instructs the family/group on what to do and where to go. They usually live in groups of about thirty (30) people, and it’s worth noting that gorilla families are generally peaceful, with only a few internal fights. Interactions between different gorilla groups are extremely unusual, despite the fact that they have been observed in the western lowland subspecies.

This explains why you won’t be able to visit all of the gorillas in one park during your gorilla trekking adventure. One gorilla family can be visited at a time. External clashes with lone males or other groups may occur, and they are often highly violent, but the silverback is able to defend his family with the support of other mature male gorillas in the group. 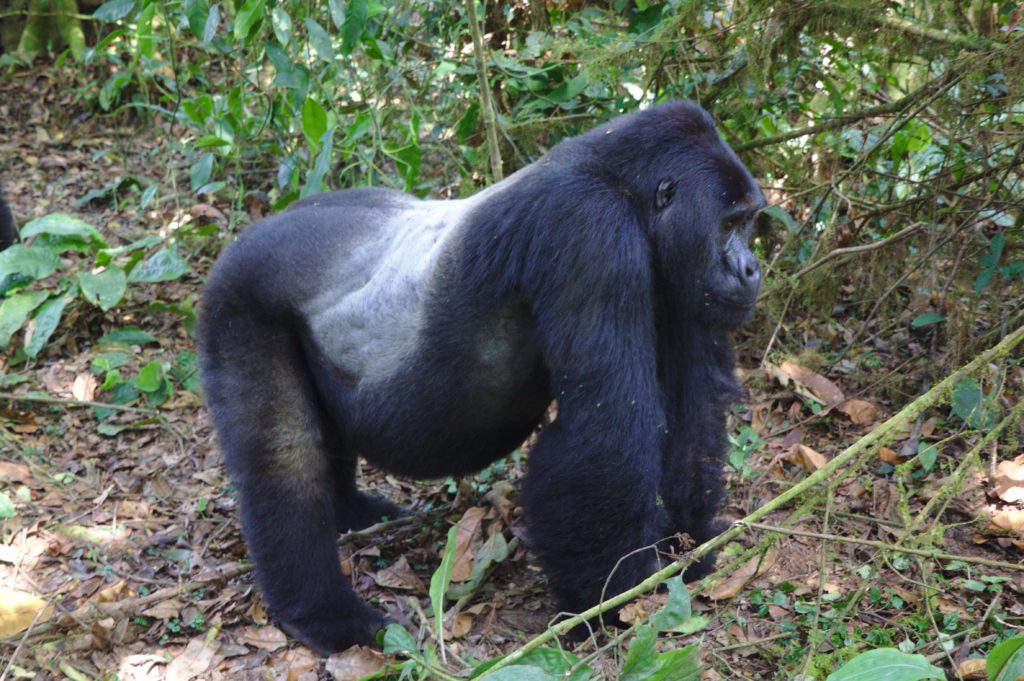 When Do Gorillas Reach Sexual Maturehood?/Reproductive

There are several elements that influence gorilla mating preferences, but the best way to grasp this is to first understand the reproductive cycle of these forest giants. Female gorillas reach sexual maturity between the ages of 10 and 12, with the ovulation cycle commencing around six (6) years earlier; nonetheless, the female remains infertile until the age of ten (10) years. Interestingly, many females leave their father’s group to escape inbreeding, while those who stay strive to avoid mating with their father as much as possible. In fact, research has shown that they would mate with less inferior men to some extent.

However, because the silverback mates with the females, after the males reach adulthood, the bulk of them abandon the group to become loners or form groups with other bachelor gorillas to steal females from other groups.

Despite the fact that the dominant silverback forms close ties with the ladies in his group, as he ages and his reproductive cycle approaches its end, the females in his group begin to leave him to join other groups. The few who are faithful to him will remain, but if that silverback dies, they will join other groups. In fact, females can switch groups numerous times to protect their offspring, especially if a new dominant silverback takes over.

How Do Gorillas Mate?

This is an issue that many wildlife enthusiasts are perplexed by. As previously stated, mating can occur all year round, with the dominant male silverback marrying all females while they are ovulating. When a female is sexually active, she initiates the mating process; nevertheless, there are times when the dominant silverback male imitates this process as well. He accomplishes this by approaching the female and then touching her or making a noisy exhibition. When the female does not answer positively, he may take it personally and charge, hitting her as he compels her to accept.

Mating takes place while both gorillas are on the ground, with the female (who is usually smaller than the dominant silverback) appearing to kneel on the ground and the male on top throughout the copulation. However, as previously stated, a number of gorilla subspecies, including the mountain and lowland gorillas, have been recorded mating while the male and female are facing each other, a method originally thought to be unique to humans and bonobos (also known as the pygmy chimpanzee). 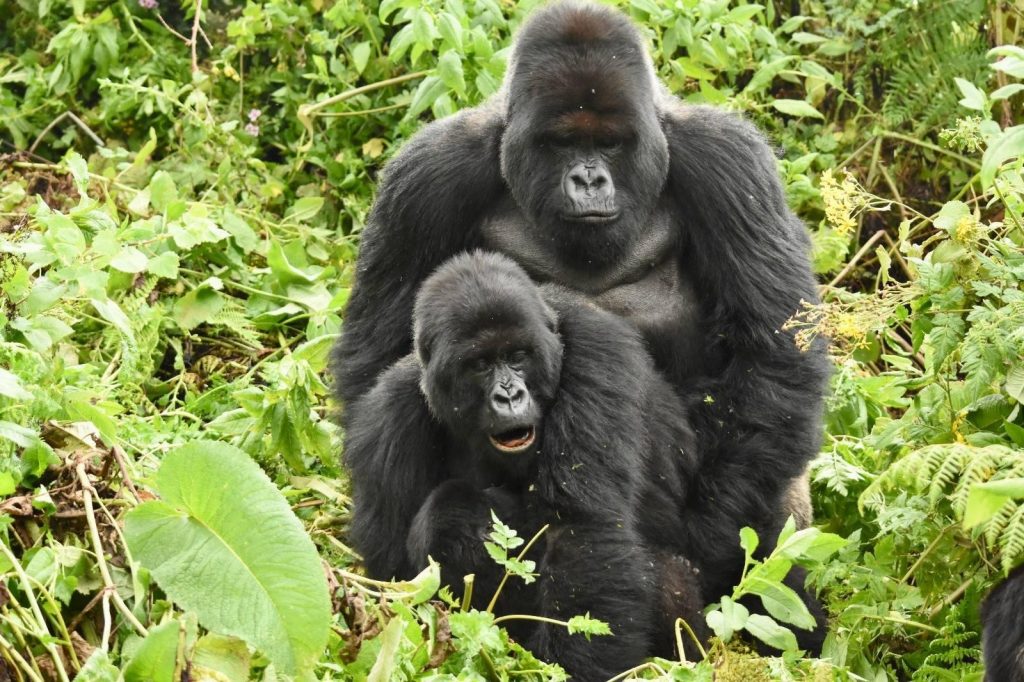 How To Tell If A Female Gorilla Is Getting Ready To Mate?

Unlike their chimp counterparts, female gorillas do not undergo any morphological changes to indicate that they are ready to mate. When the female is ready, she normally initiates the mating process by gently approaching the male, pushing her lips together, and making extended eye contact with him. When the man does not respond to her advances, she goes ahead and slaps the ground as she moves toward the male to draw his attention. It should be emphasized that there are times when the male does not respond positively to her or is too preoccupied to attend to her, in which case she is forced to mate with less inferior males within her gorilla group.

According to a 1982 study, the hostility displayed by a silverback towards a specific female drove that female to commence the mating process even while she was not in estrus.

Is it true that gorillas only mate to reproduce?

Aside from reproduction, it is exceedingly unusual for gorillas to mate/have sex for recreation or competition among themselves. Females, on the other hand, usually mate to gain favor with the dominant silverback and to prevent him from mating with other female gorillas in the group. In reality, expecting female gorillas have been observed mating with the dominant silverback, allegedly to prevent the male from impregnating other adult females who are ready for mating. Amusingly, silverbacks prefer mating with an adult experienced females in all subspecies of gorillas, yet the interest and focus a dominant silverback gives to an ovulating female causes competition among other female gorillas within that group. Male silverbacks in the western gorilla species, on the other hand, have been observed to mate with females whether they are ovulating or not, whereas the remainder would only have intercourse with sexually ready females.

If the mating is successful and the female conceives, she will have an 8.5-month gestation period and will not give birth for another four (4) years. During the pregnancy, she will notice a minor rise in breast size as well as a small bump on her tummy. They typically give birth in the early morning hours, and this is preceded by her appearing restless with multiple babies and just stretching and loss of appetite. A female gorilla may give birth to just 6 to 8 kids during her lifetime, but only a few of these will survive to adulthood because caretaking is entirely done by the females. The Silverback male, on the other hand, plays an important role in ensuring that the offspring are welcomed within the gorilla group and are not bullied by other group members, and for that reason, the mother lives near to him for protection for the first 5 months. 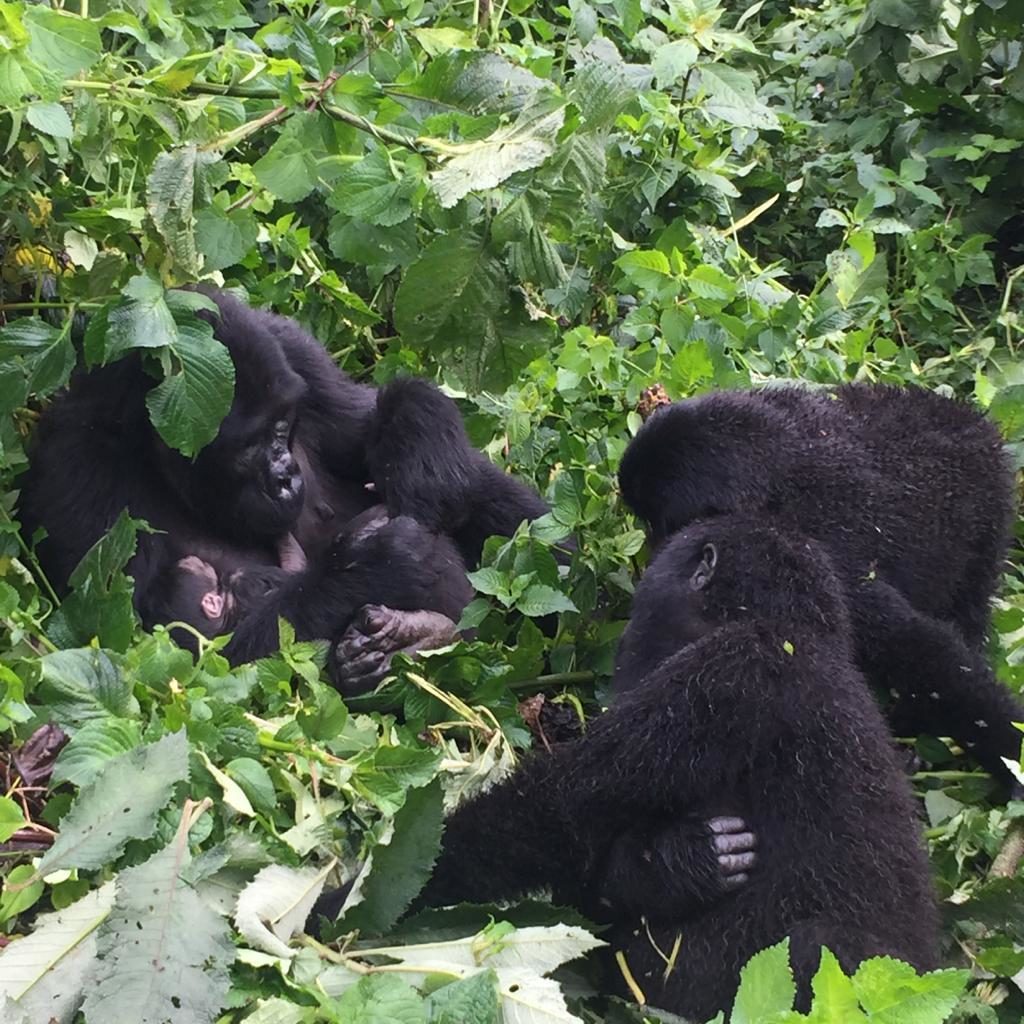 Breastfeeding And Weaning Among Gorillas

For the first four (4) months, the newborn is carried around by the mother in her hands, suckling directly on the mother’s breasts every three (3) hours. By the fifth (5) month, the infants have gained confidence among the group members and are riding on their mothers’ backs and occasionally lying on the ground near their moms. By 12 months (one year), the baby gorilla has gained enough confidence to move up to five (5) meters away from the mother for limited periods of time. He or she can spend some time away from the mother and still return to her by the second birth – date. Weaning in gorillas typically occurs when the baby is about 2.5 years (30 months) old. Nonetheless, the baby gorilla will continue to suckle (nurse) until they are about four (4) years old, at which point they will start creating their own nests and living independently of the mother, while the mother will restart ovulation.

Although the gorilla species is generally regarded as endangered on a global scale, it is unfortunate that the mortality rate among infant gorillas is significant, with roughly half of them not reaching adulthood.

Because baby gorillas rely so heavily on their mothers for so long, any change in group leadership, particularly a takeover by a new silverback, will result in the death of all nursing infants. The new silverback does this to increase his chances of successfully mating with the females in that group.

Respiratory infections are thought to be responsible for roughly 15% of baby deaths.