Here are the best Uganda tourist attractions to choose from;

1. Wildlife – The Big Five and more 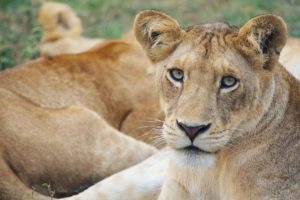 Wildlife as a tourist attraction 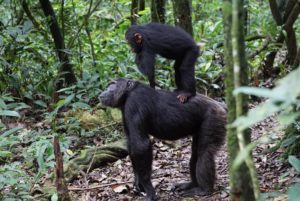 Chimps as an attraction in Uganda

Uganda is the world’s primate capital, home to 15 primate species. Uganda is indeed the primate capital of the world because as across Africa primates are under threat, thousands of them survive in Uganda. Kibale Forest National Park alone has a total of 13 primates including the recently discovered Dwarf Galago. The highest population of chimpanzees habituated for chimpanzee tracking also live in the park. Golden monkeys are only in Mgahinga Gorilla National Park where they co-exist with the silverback gorillas and therefore the slogan “where gold meets silver”. Golden monkeys live in groups of up to 30 individuals and very amazing to track and see. With their uniqueness and limitation in range, they are one of the best Uganda tourist attractions for primate tracking. Other primates in Uganda include Chimpanzees, mountain gorillas, black-and-white colobus, red-tailed monkey, grey-cheeked mangabey, L’Hoest’s and blue monkeys, Olive baboons, and golden monkeys. Nocturnal primates include the bush babies and potto. 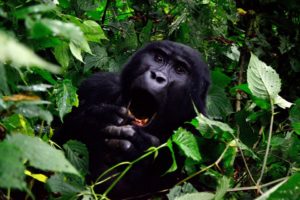 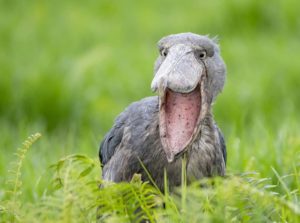 Birds are one of the popular Uganda tourist attractions for avid travelers. There are over 1,080 confirmed bird species in Uganda. Birds in Uganda include forest, savannah, water and several bird species. The Fox’s weaver is endemic to the country. One of the bird species endemic to Africa is the “prehistoric” Shoebill Stork and Uganda is host to this bird. It’s a sought after species on birding safaris that can be seen at Mabamba wetland and Murchison Falls National Park. Some of the bird species in Uganda include the Ostriches, Greater and Lesser Flamingos, Grey Crowned Crane. Little Grebe, Great Crested Grebe, Eared Grebe, Four banded sandgrouse, Kori Bustard, Denham’s Bustard, Black bellied bustard, Eastern Plantain Eater, Purple Crested Turaco, Senegal Coucal, Dideric Cuckoo, and many more. The best birding destinations in Uganda are Queen Elizabeth National Park, Semuliki National Park, Kidepo Valley National Park, Bwindi forest, Mabamba swamp, mabira forest as well as all through the country. Best time for birding in Uganda is mostly during the months of late May to September. For any avid birder, birding is rewarding for any tourist.

Uganda is culturally diverse with over 50 different tribes living within her boundaries. Each of these tribes are different from the other. Some of the most visited cultures are the Batwa pygmies, the Ik and Karamojong, Baganda and Bagishu. The Batwa pygmies are a small tribe that formerly lived in the forests of Bwindi and Mgahinga with Mountain Gorillas. The different cultures are part of the Uganda tourist attractions that can help understand the people of the Pearl of Africa. 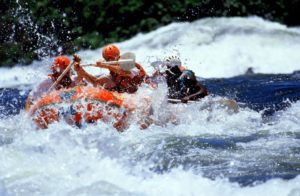 The Nile River at Jinja is home to the world’s finest grade 5 white water rafting as well as other adventure activities. The Nile River is the world’s longest river and Jinja in Eastern Uganda is home to the source of the mighty Nile River. For any adventure traveler on Uganda safaris, white water rafting is the best Uganda tourist attraction at the source of the Nile River in Jinja is the best adventure sport. The rafts on the Nile River explodes its volumes of white water through huge walls and drift through flowing with rapids northwards. Uganda tourist attractions are truly accommodating for all kinds of travelers. Solo travelers, families, groups, students and anyone from any part of the world can book a safari to Uganda. Travelers can also create tailor made tours in Uganda with Rwanda tours, Kenya safaris, safaris in Tanzania or Congo gorilla safaris.

Places to visit in Uganda Kampala

Wondering which kind of safari itinerary to choose? No worries, we have several tour packages that are inclusive of all Uganda tourist attractions for travelers to choose from. They include short Uganda safaris as well as long tours in Uganda, check through the packages and receive a free quote.