The shoebill stork, also known as the whalehead, is a long-legged, huge stork-like bird named after its large shoe-shaped bill. They are one of the top five most sought-after birds in Africa, and because they resemble storks, they have been categorized as Ciconiiformes according to their morphology. However, because adult shoebills are always grey and their young are usually brown, genetic evidence places them in the Pelecaniformes. These birds can be found in Tropical East Africa, particularly around huge freshwater wetlands.

The shoebill is a sluggish bird that does not fly more than 500 meters depending on the individual. Their flying distance fluctuates between 100m-500m due to their huge size, and their flapping rate is roughly 150 flaps per minute. As it flies, its neck retracts; in other words, it is retracted.

This bird can be distinguished from other birds by its distinctive features, such as its feathers being medium blue-grey and its tail being the same color as its wings; when it flies, its legs extend straight back far past its tail; and when viewed from a distance, especially while in its habitat, its size and wingspan distinguish it from other birds.

Because they tend to stand and stay still for lengthy periods of time, shoebill stork birds are referred to as statue-like bird species. They typically do not enjoy human disturbances, therefore if they are disturbed, they may leave their nests and seek habitation elsewhere. However, while they are looking for food in a tallgrass region, they appear to be less afraid of people in case they come along.

These birds are always drawn to fresh marsh waters that are depleted of oxygen and where fish frequently surface to breathe. Despite their size, they frequently stand and rest on floating foliage, where they always appear to be a Giant Jacana.

Their breeding; the shoebill stork birds’ lonely lifestyle also refers to their breeding. A pair of shoebill birds breeds in an area of roughly 2-4 square kilometers distant from other shoebills; unlike pelicans, storks, herons, and other birds, they do not nest in colonies. Nesting begins shortly after the conclusion of the rainy season in the northern and southern regions, but in most central locations, the shoebill stork birds begin nesting, the period at the end of a wet season so that they can hatch at the beginning of the following wet season.

These birds make their nests on floating platforms composed of aquatic plants, and both male and female shoebills participate in this activity. The nests are always roughly 1 to 1.7 meters broad and made of aquatic vegetation. The shoebill stork bird lays one to three eggs weighing around 164 g and incubates them for nearly 30 days, although they seldom raise more than one young. Both male and female shoebills carefully defend their nestlings, albeit the female is more protective, and they feed their young ones by bringing back their swallowed food directly from the gullet and placing it in the bills of their young ones.

Though these birds are always silent, they make incredible machine-gun noises. During the nesting season, adult shoebills perform bill-cluttering displays at their nests as a means of communication with their young, and during this process, the adult shoebills produce a high-pitched whining sound and a cow-like moo. When hungry chicks make begging calls for food, they create sounds similar to human hiccups, and when a “marabou stork” is around, the flying shoebill adult has been observed making horse croaks as an indication of confrontation.

The shoebill birds are tall, ranging in height from 110cm to 140cm, with some reaching a height of 152cm. Their tail length ranges from 100 to 140cm, while their wingspans are always between 230 and 260cm. Their weight ranges from 4 to 7 kilograms; males are always heavier than females, with an average weight of roughly 5.6 kilograms, and females 4.9 kilos. The upper ridge of this bird’s bill measures approximately 18.8-24cm in length, and it is a massive bulbous straw-colored feature with irregular greyish streaks.

The sharp edges on these birds’ mandibles allow them to behead their food as well as remove any foliage once they have caught it. The upper mandible is deeply keeled and finishes with a sharp edge. The shoebills have very enormous feet, with a middle toe measuring approximately 16.8-18.5cm, allowing them to stand on water vegetation. They have large wings with wing chord lengths ranging from 58.8 to 78cm, and their necks are shorter and thicker than those of other long-legged warding birds such as herons. 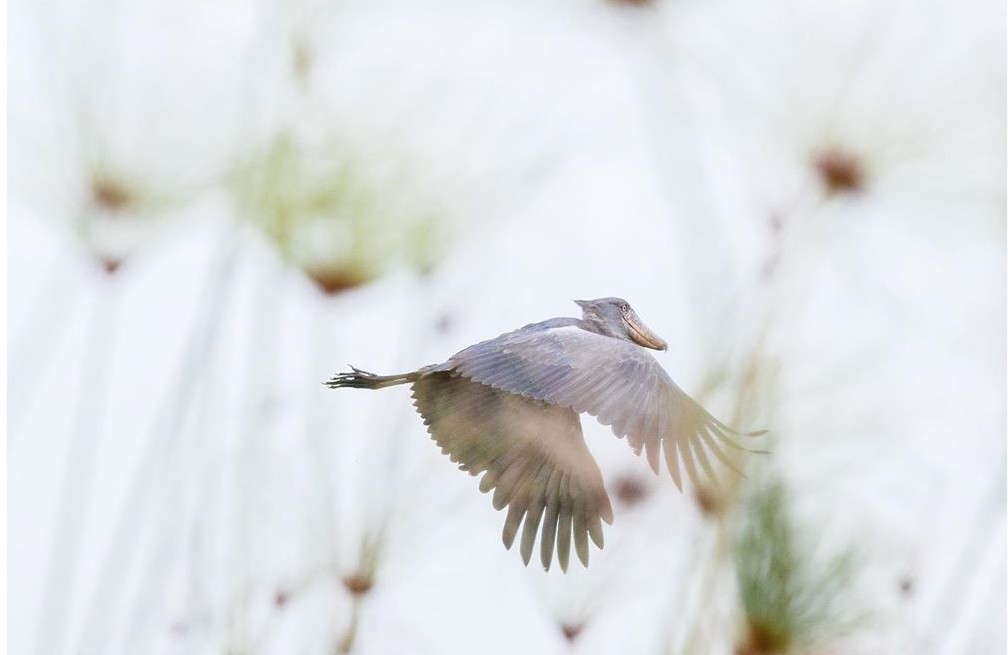 Shoebills eat fish such as tilapia, lungfish, catfish, and other forms of tiny fish. Small prey items include frogs, infant crocodiles, snakes, turtles, snails, rodents, small waterfowls, and Nile monitor lizards. In most situations, shoebills forage in muddy waters, stalking their food while waiting to ambush it; they move slowly and remain constantly immobile, unlike some other huge waders. They mainly hunt using vision, and when they discover prey, they attack it rapidly and forcefully and depending on the size of the target, it may take more than 10 minutes for it to be properly handled in its bill.

The hippopotamus’s submerge action, on the other hand, benefits the shoebills by forcing fish to the water’s surface.

The shoebill is found in freshwater swamp areas of central tropical Africa, including southern Sudan, eastern Congo, Rwanda, Uganda, western Tanzania, and northern Zambia. They are primarily found in the West Nile sub-region and other parts of South Sudan. They can also be found in Ugandan and western Tanzanian marshes. A handful of these birds have also been spotted in Kenya, northern Cameroon, Malawi, and the Central African Republic, but they are extremely rare in these places.

These birds rarely migrate, and when they do, it is due to habitat changes, food availability, and human nuisance. They like deep freshwater marshes, wetlands with undisturbed cyperus papyrus and reed beds of Typha and phragmites, and habitats with mixed flora rather than only papyrus. While on your Uganda safari, look for the shoebill.