Rwanda arguably offers the best montane birding in Africa made better with the great road network easing access, security, and safety. The country is relatively small in size makes it even easier to visit the birding spots on a short Rwanda tour. Though the country has been fairly birded, the country has had several species added to the country list since 2010. Resident bird species in Rwanda include the 29 Albertine Rift Endemics and several Lake Victoria Basin Endemics. All these endemics are those any ardent birder should not miss out on their wish list while birding in Rwanda. If you are having a short Rwanda birding tour then visiting Nyungwe Forest National Park and Akagera National Park can offer a big bird list. However, the whole country is very well vegetated and inhabit several bird species even within Kigali city

What we’ll cover in this Rwanda Birding Safari article

Where to Go Birding in Rwanda 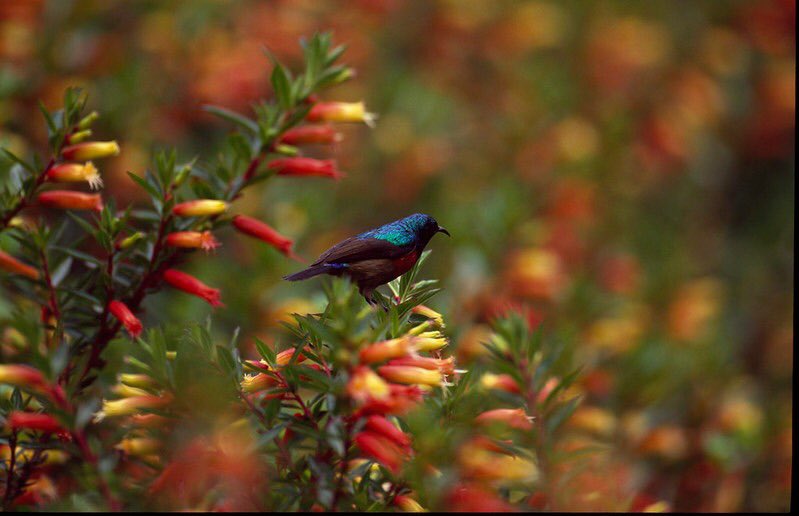 Akagera National Park: Majorly a savannah park with rolling hills, woodlands, lakes, and wetlands the park is a wildlife tour destination but still offers great birding. 490 bird species have been identified within Akagera National Park. Top restricted-range bird species in Akagera include the Red-faced Barbet, this is easily seen at Akagera game lodge and Muyumbu campsite.  Some other bird species include the Northern Brown-throated Weaver, Grey-crowned Cranes, White-collared Olive back, and many more. Pre-historic like Shoebill Stork can also be seen in Akagera National Park of Rwanda. Volcanoes National Park:  Popular for Rwanda gorilla trekking the park is also a perfect birding Rwanda spot. 200 bird species are known to be in the area and 17 of them are Albertine Rift Endemics. Scarlet-tufted Sunbird is endemic to the park in Rwanda and when birding in the country the only chances of seeing the bird is by visiting the park and hiking to the summit of Mt Bisoke.

Gishwati-Mukura National Park: Located west of Rwanda, this is the newest park in the country. The birdlife count reaches up to 232 species in the Gishwati forest and 163 bird species in Mukura Forest. The forest is a good spot for birding Rwanda’s forest birds as well as the Albertine Rift Endemics. Apart from the national parks, there are other birding hotspots all around the country. Kigali city itself is a well-vegetated city where you can spot several bird species. In Nyarutarama there are quite productive records of bird species including the White-collared Olive back and Purple Swamphen. Great sightings of water birds can be during a boat trip on Lake Ihema with birds like the African Finfoot. Birding spots also include Buhanga Sacred Forest, Gishwati-Mukura National Park, Lake Burera and Lake Ruhundo, Rugezi swamp, Bugesera District, and many more.

Rwanda is such a beautiful birding destination that suits several kinds of tour itineraries. With a bird count of 703 species, here are some of the bird species in Rwanda as listed on the African Bird Club.

When to go birding in Rwanda

Birding is good throughout the year but the best time for seeing forest birds is during the dry season. These are the months from October-November and March to May. During this time forest birding is at its best and migratory birds are present. In this season plants are flowering and attract many birds. The rainy season is also the best time for chimpanzee trekking and therefore tailoring your Rwanda tour with birding and chimp trekking is perfect. The dry season is from the months of June to September. Rwanda birding tours are indeed rewarding bird-watching safaris that can be done within a short period of time. Birding Rwanda can be tailored with all other kinds of tour activities in the country for instance wildlife tours or mountain gorilla trekking.

Save 10% Today on Rwanda Birding Safaris  – BOOK NOW | PLAN NOW
✕
LET'S START PLANNING
Not found text See all results
Open chat
Speak to an Expert!
Hello, This is Sharon - Kabira Safaris Tour Consultant. How can I be of help?