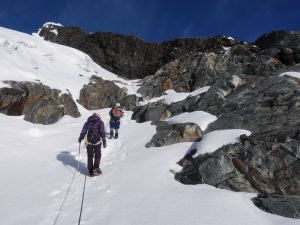 Though it is generally possible to trek Rwenzori Mountains any time of the year, there are months that are generally characterized by warm temperatures and others by colder weather with more rains, lots of glaciers and snow at the summit.

Since these months are favorable for the trek, tourists visit much frequently and these are the busiest months of the park too.

The rainy seasons are in the months of March to May and November.

Weather in the Rwenzori Mountains National Park is generally wet and the peaks covered with mists most of the time.

Climbing the Rwenzori Mountains in the dry season months has a great advantage of keeping dry most of the time during the trek.

Though there could be rains in these times that are taken to be the best time to trek the Rwenzori Mountains, there is a high possibility of low precipitation that is infrequent therefore leaving trekkers much more comfortable rather than during the heavy rains.

Acclimatization can also greatly affect trekkers and even lead to cancellation of the hike, however, with low rains there is a possibility of proper acclimatization and a general enjoyment of the trek.

With the dry season also are the brighter skies and therefore very clear views and visible scenery.

Climbing Rwenzori Mountains in the dry season offers the advantage of having a less cold trek in a high season when there are many hikers and therefore an opportunity to trek alongside other groups and socialize in the camps.

The months of March to May and November form the rainy season and still trekking is open during this time. With the season having a few tourists, the mountain is much emptier and therefore one has the chance to enjoy a remote mountain with lots of great scenery to enjoy.

The quietness and solitude of the mountains during these times is what some travelers want and therefore best time for trekkers who want to have such an environment.

Best Time to trek to the Peak?

After choosing the suitably best time to trek Rwenzori Mountains the best time for the ascent to the peak should be early in the hours between 2:00 AM and about 8:00 AM.

During these times mists and clouds often veil the peaks. The snow melts when it becomes warmer in the morning and therefore the snow melts making it not the best time to reach the peaks.